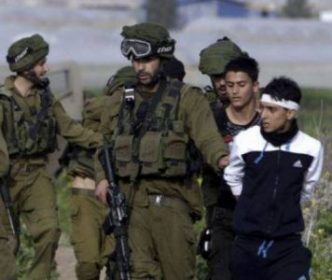 Israeli soldiers invaded, on Sunday at dawn, Abu Dis town, southeast of occupied Jerusalem, searched a home and a clinic, before kidnapping an elderly Palestinian man whose son was taken prisoner a few days ago.

The soldiers also searched the dental clinic of Samer Ayyad, the son of Mahmoud, who was kidnapped by the army several days ago.

Eyewitnesses said the invasion led to clashes between the soldiers, and local youths, who hurled stones and empty bottles on the invading forces, while the army fired several gas bombs and concussion grenades.

In related news, the soldiers continued the siege on Hizma town, northeast of Jerusalem, for the fifth consecutive day, after closing all of its entrances with concrete blocks.

The soldiers also continued the violent invasions and searches of homes throughout the town, in addition to collecting names and ID cards numbers of dozens of residents.

The army said it initiated its campaign after three of its soldiers were injured near the town.