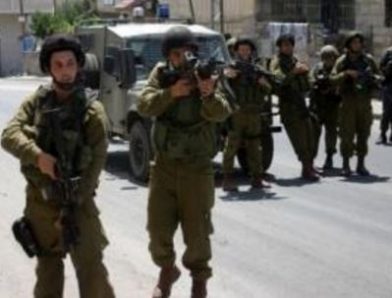 Israeli soldiers have kidnapped, On Sunday at dawn, two Palestinians from the in the southern West Bank district of Hebron, and violently searched several homes, the Palestinian Prisoners Society (PPS) has reported. The soldiers also kidnapped two Palestinians, from Bethlehem, on Saturday at night.

The PPS said several army vehicles invaded Beit Ummar town, north of Hebron, before the soldiers searched and ransacked a number of homes, and interrogated many Palestinians.

The soldiers then kidnapped one Palestinian, identified as Abdul-Nasser Abdul-Hamid Abu Mariya, 19.

It also said that the soldiers invaded and violently searched many homes in the center of the town, and the ath-Thaher area, close to the illegal Karmie Tzur colony, built on private Palestinian lands.

Another Palestinian, identified as Mousa Suleiman E’mar, from Hebron city, was kidnaped after the soldiers stopped him at a military roadblock, near Bethlehem.

Late on Saturday at night, the soldiers kidnapped two young Palestinian men, after stopping them at a sudden military roadblock, near the western entrance of Beit Jala city, in the district of Bethlehem.

The two have been identified as Mohammad Maher Masalma, 23, and Hamza Mahmoud Masalma, 20.