Army Kidnaps Five Palestinians In Jerusalem, Injure One Near Bethlehem 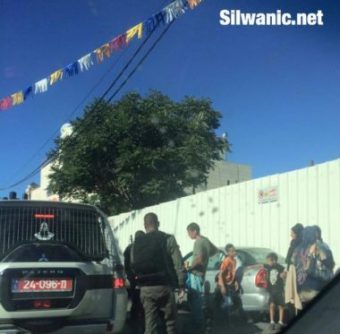 Israeli soldiers kidnapped, on Friday evening, five Palestinians, including an elderly man, in several areas of occupied East Jerusalem. The army also shot and injured a Palestinian in Teqoua’ town, east of Bethlehem.

On Friday evening, the soldiers invaded the Sa’diyya neighborhood, in Jerusalem’s Old City, searched homes and kidnapped a young man and an elderly man, before moving them to an interrogation center.

The army also kidnapped a young man, identified as Fuad al-Atrash, after stopping him near one of the gates of the Al-Aqsa Mosque.

In addition, the soldiers invaded Shu’fat neighborhood, in the center of Jerusalem, and kidnapped a young man, identified as Anas al-Kiswani.

In related news, the soldiers invaded the town of Teqoua’, east of the West Bank city of Bethlehem, and moderately wounded a young man.

One Palestinian was shot with a live round in his abdomen, before he was moved to the Beit Jala governmental hospital. His condition has been described as moderate but stable. Many Palestinians suffered the effects of tear gas inhalation.