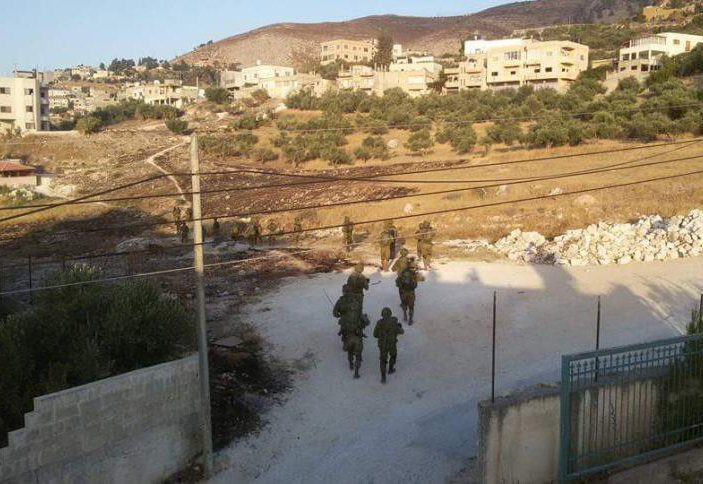 Israeli violations of international law and international humanitarian law in the occupied Palestinian territories continued during the reporting period (14 – 20 July 2016).

In the West Bank, at approximately 16:50 on Tuesday, 19 July 2016, Israeli soldiers who guard the annexation wall near Nazlet al-Kasarat area in al-Ram village, north of East occupied Jeruslaem, fired rubber-coated metal bullets at Muhie al-Deen Mohammed Sedqi Mohammed Tabakhi (11) when he was along with other children near a hill overlooking the wall.  Tabakhi was wounded and then taken to al-Ram Medical Centre.  He was then transferred to Palestine Medical Complex in Ramallah, where he succumbed to his wounds.

On 19 July 2016, the Palestinian Ministry of Health declared the death of Mustafa Barad’iyeh (52) from Beit Fajjr village, south of Bethlehem.  The aforementioned was wounded at the entrance to al-‘Aroub refugee camp, north of Hebron on 18 July 2016 after stabbing two Israeli soldiers.  He was taken by an Israeli military ambulance to an unknown destination.

On 14 July 2016, 10 Palestinian civilians, including 2 children, were wounded when a group of undercover units of Israeli forces sneaked into al-Mazra’ah al-Qabaliyah village, northwest of Ramallah.  The units raided and searched a house belonging to Tariq ‘Aqel Abu Rabi’a and arrested him.  Meanwhile, a number of Palestinian children and youngsters gathered to throw stones at the units, who in response opened fire at them.  Fifteen minutes later, 3 Israeli military vehicles moved into the village to back up the undercover units and secure their withdrawal.  The Israeli soldiers opened fire at the demonstrators, resulting in the injury of ten civilians; one of whom sustained serious wounds.

On the same day, Israeli forces stationed at Sho’afat checkpoint, north of occupied East Jerusalem, opened fire at Yehia Hashem Hejazi (24) while crossing the checkpoint.  As a a result, he was hit with 9 bullets to the right foot and then taken to “Shaare Zedek” Medical Centre for medical treatment.  He is so far under arrest.  Israeli forces claimed that he attempted to carry out a stab attack against Israeli soldiers, who in response opened fire at him.  Israeli forces later backed away from their claim and stated the shooting was by mistake.

In the context of opening fire at the border areas, on 20 July 2016, Israeli forces stationed along the border fence between the Gaza Strip and Israel, east of al-Salqa Valley, east of Deir al-Balah, opened fire at farmers in the area.  As a result, one of the farmers was hit with a bullet to the left thigh.

In the context of targeting Palestinian fishermen in the Sea, on 17 July 2016, Israeli hunboats stationed off al-Soudaniya shore, west of Jabalia in the northern Gaza Strip, heavily opened fire at Palestinian fishing boats and chased them.  The boats were sailing within 3 nautical miles, and no casualties were reported.

During the reporting period, Israeli forces conducted at least 78 military incursions into Palestinian communities in the West Bank and 5 ones in occupied East Jerusalem and its suburbs. During these incursions, Israeli forces arrested at least 59 Palestinian civilians, including 6 children and 2 women.  Sixteen of them, including 3 children and a woman, were arrested in occupied Jerusalem.

In the Gaza Strip, on 20 July 2016, Israeli forces moved 50 meters into the eastern side of Jabalia in the northern Gaza Strip.  Amidst Israeli sporadic shooting, Israeli bulldozer sdug and levelled vacant lands along the border fence between the Gaza Strip and Israel.  Neither casualties nor damages were reported.

The illegal closure of the Gaza Strip, which has been steadily tightened since June 2007 has had a disastrous impact on the humanitarian and economic situation in the Gaza Strip.  The Israeli authorities impose measures to undermine the freedom of trade, including the basic needs for the Gaza Strip population and the agricultural and industrial products to be exported. For 9 consecutive years, Israel has tightened the land and naval closure to isolate the Gaza Strip from the West Bank, including occupied Jerusalem, and other countries around the world. This resulted in grave violations of the economic, social and cultural rights and a deterioration of living conditions for 1.8 million people.  The Israeli authorities have established Karm Abu Salem (KeremShaloum) as the sole crossing for imports and exports in order to exercise its control over the Gaza Strip’s economy.  They also aim at imposing a complete ban on the Gaza Strip’s exports. The Israeli closure raised the rate of poverty to 38.8%, 21.1% of which suffer from extreme poverty. Moreover, the rate of unemployment increased up to 44%, which reflects the unprecedented economic deterioration in the Gaza Strip.