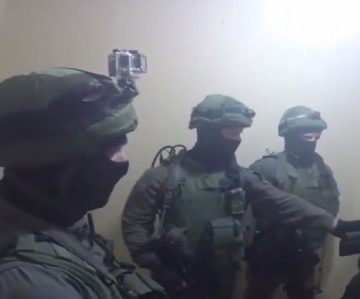 The Palestinian Prisoners’ Society (PPS) has reported that Israeli soldiers have kidnapped, on Friday at dawn, at least nine Palestinians, including former political prisoners, in different parts of the occupied West Bank.

The soldiers also invaded the al-‘Arroub refugee camp, north of Hebron in the southern part of the West Bank, and kidnapped Wadea’ Qassam and Amro Haddoush.

In Ezbet at-Tabib village, west of the northern West Bank city of Jenin, the soldiers searched a few homes and kidnapped Ala’ Ahmad Jabarin.

A Palestinian woman, identified as Rania al-‘Abbassi, 36, was kidnapped from her home in Silwan town, in occupied Jerusalem, after the soldiers stormed the property and searched it. She is the wife of Ala’ Abbassi, who is also imprisoned by Israel.

The soldiers also invaded Beit Dajan town, east of the northern West Bank city of Nablus, before breaking into the home of Radwan Abu Thabet, and confiscated mobile phones and computers belonging to him and his family.

Abu Thabet has two sons who are imprisoned by Israel; Soheib who was sentenced to two and a half years, and Naseer, who was kidnapped a month ago, and is still under interrogation.