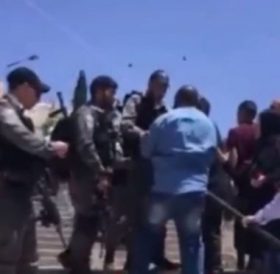 Israeli soldiers kidnapped, on Sunday evening, the head of the Jerusalem office of the Palestinian Prisoners Society (PPS), Nasser Qous.

PPS Lawyer Mofeed al-Haj said the soldiers kidnapped Nasser Qous and moved him to an interrogation facility in the city.

The Israeli military is accusing Qous of “incitement,” for statements defending the Palestinian detainees, facing ongoing violations, and many holding hunger strikes demanding an end to their arbitrary Administrative detention, without charges.

Also on Sunday, the army detained two young women, Afnan and her sister Anhar Yousef al-Baz, and released them after issuing an order preventing them from entering the Al-Aqsa Mosque in Jerusalem for 15 consecutive days.

The two are from Lod city, and were kidnapped just as they were leaving the mosque through Bab al-Majles (Council Gate). There were interrogated for several hours in the al-Qashla police station in Jerusalem’s Old City.