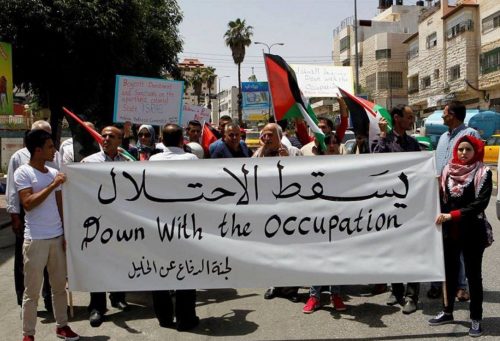 Sunday June 5th marks the 49th anniversary of the day known to Palestinians as the ‘Naksa’, the day that the Israeli military occupied the West Bank, Gaza Strip, Golan Heights and Sinai peninsula. 49 years later, the military occupation continues.

During the Naksa, around 300,000 Palestinians were forced from their homes, and became refugees.

The occasion was marked by a number of rallies throughout the Occupied Palestinian Territories, which were assaulted by Israeli forces who attacked with so-called ‘less than lethal weapons’ including tear gas, rubber-coated steel bullets and concussion grenades.

In Hebron, in the southern West Bank, the Hebron Defense Committee held a march that began near the Israeli-only settler bypass road near Hebron, but as they marched down the road Israeli troops blocked their way and prevented them from moving forward.

The group held a rally where they were blocked, and a number of local leaders gave speeches. A local representative of the Popular Front for the Liberation of Palestine (PFLP) stated, “We will continue to struggle until the last Israeli soldier and the last settler leaves Palestinian land”.

Bassam Shweiki, coordinator of the Hebron Defense Committee, told the IMEMC that the protest was held in commemoration of the 49th anniversary of the Palestinian Naksa, to express rejection of this illegal occupation.

Shweiki added that Hebron is the only town in the West Bank, besides Jerusalem, were Israeli settler live in the city itself, even occupying home in the Old City, dividing neighborhoods, and causing more suffering to the people.

“One of our targets in the Hebron Defense Committee is to raise awareness on the issue,” he stated, “liberty and human rights defenders need to be aware of it, we have ties with many international solidarity movements and organizations.

Rallies were also held in other towns and villages, and were similarly attacked.

Palestinians remembered the day on June 5th, 1967, when Israeli forces attacked all parts of Palestine. In a piece written in the Electronic Intifada in 2013, reporter Rami Almeghari interviewed a survivor of that assault in Gaza, who said that on June 5th 1967, “As the Israeli tanks fired at and hit the western parts of our camp, I took my three children and wife and fled to the nearby coastal village of Zawaida, to the west of al-Maghazi. Not only did we flee, but the majority of the camp’s inhabitants [did too]. We stayed in Zawaida about one week, until the attacks by the Israeli tanks and warplanes calmed down.”

The 1967 Naksa followed the Nakba (Catastrophe) of 1948, in which over 750,000 Palestinians were forcibly removed from their homes or fled in terror when massacres were carried out by the newly-formed Israeli army and armed militia groups like the Haganah. The Palestinian residents became refugees, and have been unable to return to their homes since that time.

In Almeghari’s account, the survivor of the 1967 Naksa who he interviewed stated, “Neither the Naksa nor the Nakba has killed my dream of returning home. Whatever solutions politicians might bring to us, we can never accept them unless they involve the right to return to our homes, where our ancestors were born and raised.”