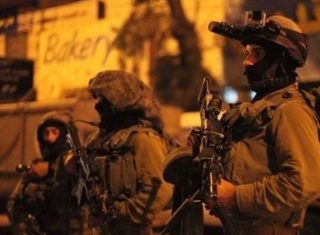 The Hebron office of the Palestinian Prisoners Society (PPS) has reported that the soldiers invaded several neighborhoods in the city, stormed and ransacked many homes and kidnapped six Palestinians.

It is worth mentioning that al-Haymouni’s brother was injured after the soldiers fired rubber-coated steel bullets while invading the family home, before Palestinian medics moved him to a nearby hospital.

In addition, the army invaded several neighborhoods in Yatta town, especially the al-Heela neighborhood, in addition to the towns of Beit Amra, Susiya and al-Karmel, before soldiers searched homes belonging to Ed’eis family, and a cattle farm belonging to Sami al-Adra.

The soldiers also invaded and searched al-Adra’s home, and his sons’ homes, and violently searched them.

In related news, the Jerusalem Office of the Palestinian Prisoners Society (PPS) has reported that Israeli soldiers kidnapped a young Palestinian man, in occupied Jerusalem, and confiscated electronic equipment.

Also on Monday at dawn, the soldiers kidnapped a Palestinian mother and her daughter, from their home in Qusra village, southeast of the northern West Bank district of Nablus, just four days after the army abducted her husband and son.