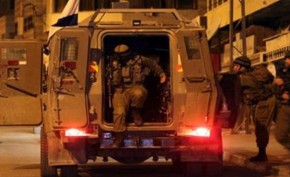 Palestinian media sources have reported that Israeli soldiers invaded, on Monday at dawn and at night Sunday, several areas in the northern West Bank district of Nablus, searched many homes, and kidnapped at least six Palestinians.

The sources said the soldiers invaded Tal village, south of Nablus, and kidnapped Malek Bilal Eshteyya, 23, and searched many homes.

The soldiers also invaded the homes of Soheib Ali Ramadan, who works for the Palestinian Customs Department, and Odai Ashraf Saifi, an officer with the National Security Forces, but they were not there, and the soldiers informed their families they needed to turn themselves in to the army.

In addition, the soldiers kidnapped Dirar Ja’far Thaher, after invading and searching his home in Beit Eeba village, west of Nablus.

Another Palestinian, identified as Khaled Dawabsha, 40, was kidnapped at the al-Karama Border Terminal, while heading back home from Jordan.

In addition, three Palestinians, identified as Yousef Nasasra, 19, Hasan Hussein Nasasra, 22, and Thiab Nasasra, 23, from Beit Forik village, south of Nablus, were taken prisoner at a construction site, for “entering Israel without permits.”

Late on Sunday at night, the soldiers invaded Barta’a village, southwest of the northern West Bank city of Jenin, and Jenin city, kidnapped one Palestinian and injured many others.