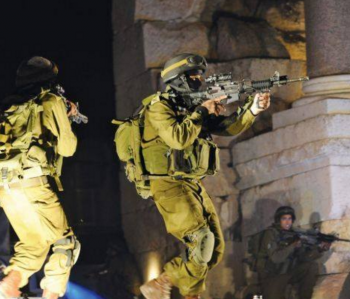 Israeli soldiers have kidnapped, earlier Thursday, one Palestinian in Qotna town, northwest of occupied Jerusalem, and another near the light-rail station, south of Jerusalem, and moved them to interrogation facilities.

The Palestinian Prisoners Society (PPS) said the soldiers kidnapped Mahmoud Mohammad Shamasna, after invading and searching his home in Qotna town, and interrogated several members of his family.

It added that the soldiers also kidnapped a child, identified as Bilal Mteir, after storming his home and searching it, in Qalandia refugee camp, north of Jerusalem.

On Wednesday night after midnight, dozens of Israeli soldiers invaded, the city of Yatta, south of the southern West Bank city of Hebron, and demolished the family homes of two Palestinians who carried out a fatal shooting attack in Tel Aviv two months ago.