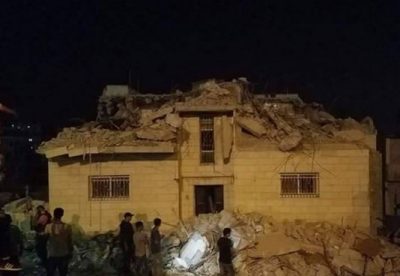 Dozens of Israeli soldiers invaded, on Wednesday night after midnight, the city of Yatta, south of the southern West Bank city of Hebron, and demolished the family homes of two Palestinians who carried out a fatal shooting attack in Tel Aviv two months ago.

Media sources in Hebron said hundreds of soldiers invaded Yatta after completely surrounding, and isolated it, and demolished the home of detainee Khaled Mousa Makhamra, after forcing the family out.

The soldiers also invaded the al-Heela area, in Yatta, and demolished the home of detainee Mohammad Ahmad Makhamra. 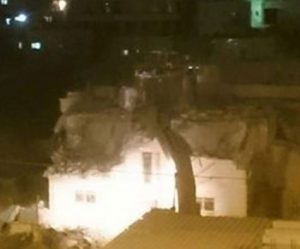 Army engineers wired the property and detonated it, before using armored military bulldozers leveled the rubble.

Prior to demolishing the two properties, the soldiers invaded all surrounding homes, and forced the families out.

The shooting in Tel Aviv led to the death of four Israelis, while many others were injured. Following the attack, the soldiers broke into the family home of the Palestinian attackers in Yatta, and measured it for demolition.