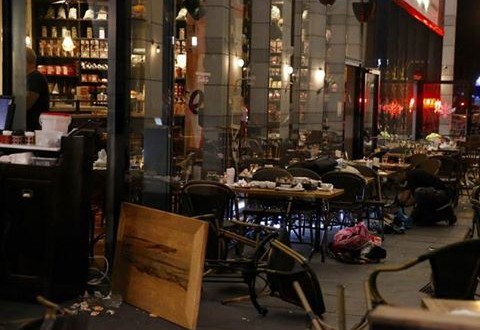 Four Israelis were killed and several others injured, Wednesday night, in a shooting that took place in Tel Aviv by two Palestinian youth.

The two shooters, cousins in their early twenties, are reportedly from Yatta city, southern West Bank. One of them was arrested and taken in for questioning, while the other, who was injured, was taken to a hospital.

The attackers were disguised as ultra-Orthodox Jews when they entered a cafe in Tel Aviv.

Father of one of the youths, Ahmad Khamamreh, said that his son, Mohammad, is not affiliated to any political party or organization, and that the family was utterly shocked when they heard about him in the news.

“They [cousins] left the house wearing suits, which they never do, they always wear jeans and a T-shirts like all the guys here [in Yatta]. but I never expected them to do anything like this. They were not involved in such things at all,” Ahmad told PNN in an interview.

Ahmad says that the two left Yatta at about 9 AM, and that the family had lost contact with them and started searching for them in the city.

This went on until the Iftar time, sunset, when the family then called the PA security in Hebron, who also did not have the cousins. They then heard about the shooting in the news.

“After a long search we heard that there have been an operative in Tel Aviv and we were told that they might be our sons since the news said they were cousins, both in their twenties and from Yatta.”

In response to the shooting, Israel has cancelled entry permits for 83,000 Palestinians during the holy Muslim month of Ramadan.

Following the attack, as well, Israeli Forces broke into the family home of the Palestinian attackers in Yatta, and measured it for demolition.

“The [soldiers] searched the house, asked me about him and asked me where he sleeps… I answered that my son does not have his own house and sleeps here in a room with his siblings. Then they brought an engineer and took measurements of the house,” Ahmad said.

Soldiers have also closed down all the entrances and exits of the city, and are searching all the cars passing there.

The political situation has been worsening since October of 2015, between Palestinians and Israelis, with the escalation of Israeli confiscation of land, executions and imprisonments. Since then, 32 Israelis,  two visiting US citizens, and some 218 Palestinians have been killed.