Army Kills A Palestinian, Injures 48, Including 4 Medics And 2 Journalists In Gaza 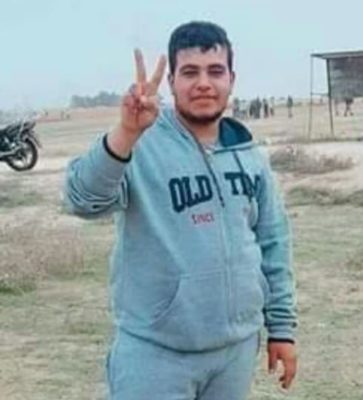 The Palestinian Health Ministry in Gaza has confirmed that Israeli soldiers killed, Friday, one Palestinian, and injured 48 others, including four medics and two journalists, in the Great Return March processions, in the eastern parts of the besieged Gaza Strip.

The Health Ministry said the soldiers killed Tamer Khaled Mustafa Arafat, 23, after shooting him with live fire, east of Rafah city, in the southern part of the Gaza Strip.

Tamer was hit with a live round in the head, and was rushed to the Gaza European Hospital, but succumbed to his serious wounds.

The Palestinian Center for Human Rights (PCHR) has confirmed that a total of 133 civilians, including 32 children, have been injured, and that one of the wounded Palestinians suffered a serious injury.

It added that dozens of protesters, paramedics and journalists suffered the effects of teargas inhalation and seizures.

The soldiers also fired a high-velocity gas bomb at a Palestinian ambulance belonging to the Health Ministry, east of the al-Boreij refugee camp, in central Gaza Strip, causing damage.

It added that Israeli forces have killed 192 Palestinians since the Great Return March processions started in the Gaza Strip, on March 30th, 2018. Among them are 41 children, 2 women, 2 Journalists, 3 medical crews and eight with disabilities.

The PCHR said that the army also injured 11213 Palestinians, including 534 who suffered serious wounds, 114 who had their lower of upper limbs amputated.

The number of those wounded only include those shot with live bullets and directly hit with tear gas canisters as there have been thousands who suffered tear gas inhalation and sustained bruises, the PCHR said.