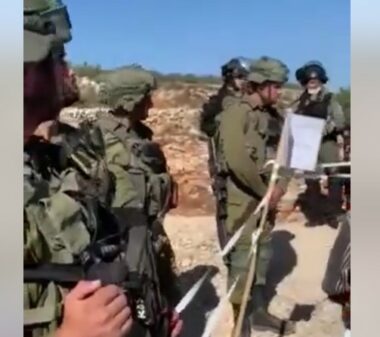 The Israeli army prevented, Monday, dozens of farmers and volunteers from reaching Palestinian orchards to pick the olive trees in the ar-Ras area west of Salfit in the central West Bank, and declared the area a “closed military zone,” before abducting three young men, in addition to causing dozens to suffer the effects of tear gas inhalation.

The Palestinians, including activists of the Wall and Colonization & Wall Resistance Commission and members of various national factions and social groups, in addition to community institutions, tried to enter the ar-Ras area to pick the trees in the olive orchards, but the soldiers refused to allow them through after declaring the entire area a “closed military zone.” The soldiers also fired many gas bombs at the Palestinians, causing dozens to suffer the effects of tear gas inhalation, and abducted three young men.

The orchards are in an area where Israel is planning to illegally annex large swaths of Palestinian lands to continue the construction and expansion of the illegal colonies in direct violation of International Law.

Walid Assaf, the head of the Colonisation & Wall Resistance Commission, said the soldiers were heavily deployed in the ar-Ras area, and prevented the Palestinians from reaching the olive orchards.

“More volunteers are joining us, and we will remain steadfast on our lands,” Assaf stated, “We will continue to support the farmers, and will not leave them to face the Israeli aggression on their own.”