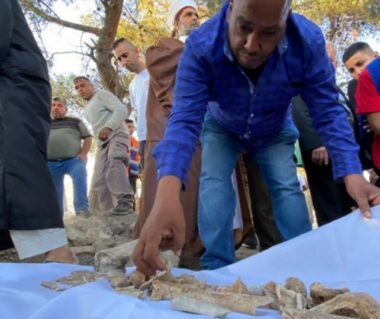 Many Palestinians reburied, on Monday evening, the skulls and bones in a Muslim cemetery in occupied Jerusalem, after Israeli bulldozers desecrated their graves in the historic Al-Yusufiya historic Islamic cemetery.

Sheikh Omar al-Kiswani, the director of the Al-Aqsa Mosque in Jerusalem, described the Israeli attack against the graveyard as a serious violation and added that the Israeli bulldozers did not only uncover the skulls and bones of the dead but also smashed and broke many of them.

“It is our moral and religious duty to rebury the dead in an official burial ceremony,” he said, “We must protect our dead, our sacred sites, but we aren’t surprised by this serious violation, as such Israeli violations are not new. Israel is desecrating the graves in front of the whole world, encouraged by international silence and indifference.”

Attorney Hamza Qteina said that he submitted an urgent appeal with the Israeli court in Jerusalem demanding halting the digging and desecration of graves, especially since the City Council in occupied Jerusalem is claiming that the work is only meant to establishing a “National Garden,” without digging and desecrating graves.

Qteina described the desecration of old Islamic graves as a serious violation, and a crime targeting the dead and the history of the holy city.

The latest dissertation took place on Sunday when Israeli bulldozers dugs graves to establish a so-called “national garden”, and the army injured three Palestinians, including a medic.