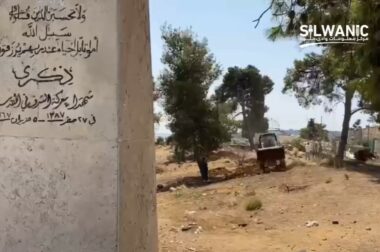 JERUSALEM, Sunday, September 5, 2021 (WAFA) – Israeli occupation authorities embarked today on levelling parts of the Al-Yusufiya Cemetery in the old city of occupied Jerusalem, in a prelude to establish a biblical national park on the site of the cemetery, according to local sources.

Hamza Quttena, a Palestinian lawyer, told Arab 48 website that the court’s order allows the transfer of the land of the cemetery into a national park so that Palestinian Muslims will no longer be able to build new graves there, which is part of the overall “Judaization” of Jerusalem by the Israeli occupation authorities.

The cemetery houses the graves of Palestinian, Jordanian and Iraqi martyrs who were killed by Israeli militias during the 1967 war in Palestine.

In December 2020, the Israeli occupation authorities demolished the wall of the cemetery adjacent to the al-Asbat Gate and removed its archaeological stairs in addition to the stairs leading to the martyrs’ cemetery.

In 2014, the occupation authorities prevented burial in the cemetery’s northern area and removed twenty graves of Jordanian soldiers who were martyred in 1967 in what is known as the Cemetery of the Martyrs and the Monument of the Unknown Soldier.

The cemetery is one of the most prominent Islamic landmarks in occupied Jerusalem, and houses the remains of senior Arab and Palestinian scholars, along with hundreds of martyrs.