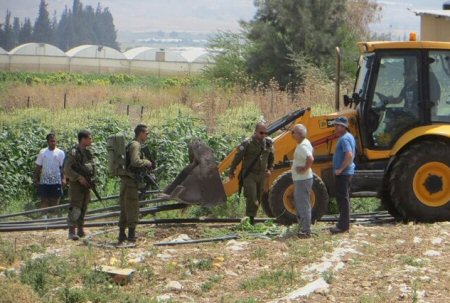 Israeli soldiers dismantled and seized, on Thursday, 200 meters of water pipes from residents of the village of Bardalla, in the northern Jordan Valley, who built them in order to provide their village with fresh water, according to Aref Daraghmeh, a local human rights activist.

He said the pipes were not yet ready for use.

Soldiers also demolished, on Wednesday, a pool used to collect rain water in the village of al-Farisiyeh, in the northern Jordan Valley.

(photo:  Israeli forces in the village of Bardala, May 2017, Jordan Valley Solidarity)