Army Shoots A Medic In Qalandia, Dozens Of Residents In Al-Biereh 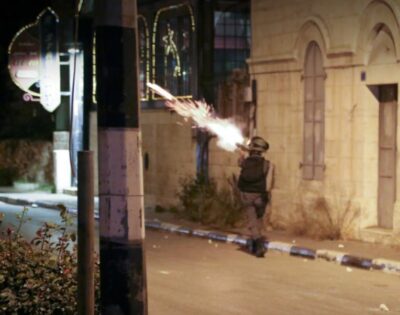 Israeli soldiers shot, on Friday at night, a Palestinian medic near the Qalandia Terminal, north of occupied Jerusalem, and caused dozens of residents to suffer the effects of tear gas inhalation in al-Biereh city, north of the central West Bank city of Ramallah.

Eyewitnesses said the soldiers resorted to the excessive use of force against Palestinian protesters near the Qalandia Terminal and fired a barrage of rubber-coated steel bullets, gas bombs, and concussion grenades at them and the surrounding areas, including homes and stores.

They added that a volunteer medic with the Palestinian Civil Defense, was shot with a rubber-coated steel bullet in his face after the soldiers targeted him and other medics while helping wounded Palestinians.

The medic and dozens of injured Palestinians were moved to Palestine Medical Complex in Ramallah.

In addition, the soldiers closed the main Jerusalem-Ramallah Road and isolated the entire area near the Qalandia terminal in addition to sealing the main entrance of al-Biereh.