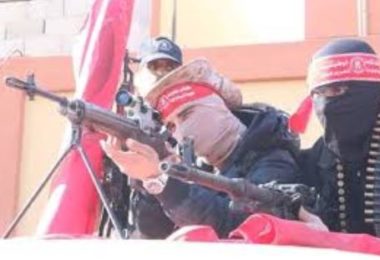 Israeli soldiers shot and moderately injured, Friday, a Palestinian resistance fighter of the National Resistance Brigades, the armed wing of the Democratic Front for the Liberation of Palestine (DFLP), in northern Gaza.

The Palestinian was injured after the soldiers fired a barrage of live rounds at a site, run by the Brigades, in northern Gaza.

In a statement, the National Resistance Brigades said the attack is part of Israel’s ongoing violations, and added that its fighters will continue to train and remain ready for any Israeli escalation, especially amidst the serious violations against the Palestinian people, not only in Gaza, but also in the West Bank, including occupied Jerusalem.

In addition, the Israeli army said that its soldiers arrested, on Friday evening, four Palestinians, who reportedly crossed the perimeter fence, in the southern part of the Gaza Strip, “carrying knives and grenades.”