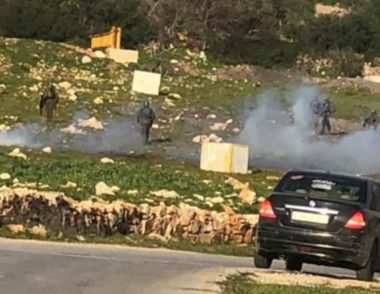 Israeli soldiers invaded, on Monday evening, the village of Nabi Saleh, northwest of the central West Bank city of Ramallah, and shot a young man.

Medical sources said the soldiers shot the young man with a live round in the leg, before he was rushed to a hospital for treatment.

The Palestinian was shot after the soldiers invaded the village and attacked protesters, especially when the army closed the iron gate, which was installed on the road leading to the nearby Bani Zeid al-Gharbiyya village.