Army Shoots A Young Man And His Wife Near Tulkarem 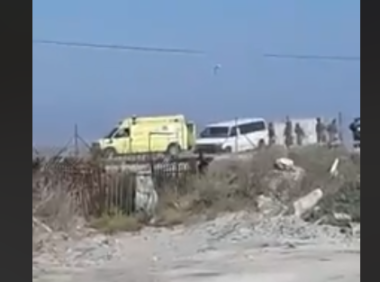 Israeli soldiers shot, Tuesday, a young Palestinian man and his wife, near the Annexation Wall, west of Zeita village, north of the northern West Bank city of Tulkarem.

Eyewitnesses said the soldiers, stationed at the gate of the Annexation Wall in that area, opened fire at Yahia Abu Khater, 25, and his wife, while they were walking near it.

The Palestinian couple were both injured, before the soldiers abducted the husband and took him in an Israeli ambulance, while his wife was transferred by Palestinian medics to a governmental hospital in Tulkarem.