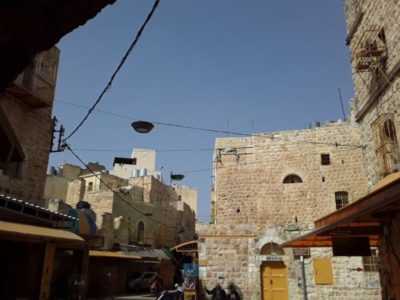 In the early morning hours on Monday, Israeli forces invaded the homes of the families of two Palestinian prisoners in Tulkarem and measured them in preparation for demolition.

Though the vast majority (around 90% according to the Israeli Committee Against House Demolitions) of demolitions of Palestinian homes are administrative – with the claim that Palestinians ‘constructed the homes without permits’, around 10% are punitive demolitions, in which Israeli troops demolish the homes of the family members of Palestinians accused of crimes against Israelis.

In this case, the two Palestinians in question stand accused of murdering an Israeli soldier and settler, Dvir Sorek, on Saturday.

Their family members have not been accused of any crime, but will nevertheless be forced into homelessness by the Israeli policy of punitive home demolitions.

The two accused men, cousins Nseir Asafra, 24, and Kassem Asafra, 30, were abducted on Saturday after a widescale manhunt by Israeli forces after an Israeli soldier was found dead.

They were taken from their village of Beit Khalil, north of Hebron in the southern part of the West Bank.

In addition to the two cousins, Israeli forces also abducted Kassem’s wife Enas, and another relative, Akrama Asafra, who was suspected  of aiding the two suspects.

Israeli military spokespersons have said that they believe the killing of Svorek was a “crime of opportunity” and that the suspected killers were not a part of armed resistance movements.

According to the Israeli Committee Against House Demolitions, “Between 2001-2005, according to B’tselem figures, 664 Palestinian homes were demolished in the Occupied Territory as forms of punishment. Some 4,182 innocent people were displaced, many of them neighbors of the suspect’s family, and this often on the basis of suspicion alone.”

The group’s report continues, “The idea behind punitive demolitions is simple and straightforward: Palestinians (like everyone else) hold their homes sacred, and since they live in extended families, the loss of a home serves as an effective deterrent to others who might carry out attacks if they knew that their family’s home would be destroyed. The policy of punitive demolitions in fact grew out of the British Emergency Regulations of 1945, which none other than Menachem Begin referred to as “Nazi” regulations and worked tirelessly, though ultimately unsuccessfully, to have them cancelled during his years in the Knesset.”

According to ICAHD, the Israeli military “itself has concluded that far from constituting effective deterrence, the policy of punitive demolitions actually inflamed an already combustible environment. To add to the irony, the military committee that concluded thus was convened by Defense Minister Moshe Yaalon, then-Chief of Staff, the very one now overseeing the reinstating of that failed policy. Indeed, it was Ya’alon himself who ended punitive demolitions in 2005.

“The return to punitive demolitions, which officially have no positive impact on either political policy or security, is therefore the exercise of raw, atavistic violence, unfocused revenge against suspects not yet tried or convicted, and innocent family members and neighbors – part of a broad policy of repression unlinked to any political process that may resolve the conflict.

“Not only do punitive demolitions violate the basic principle of due process of law, the home in question belonging only to a suspect, but the targeting and punishing of a suspect’s family members innocent of any crime through the demolition of their home constitutes collective punishment, a violation of Article 33 of The Geneva Convention relative to the Protection of Civilian Persons in Time of War (the Fourth Geneva Convention). That Article reads: ‘No persons may be punished for an offense he or she has not personally committed,’ and it defines collective punishment as a war crime.

“Needless to say, punitive demolitions are only applied when the attacker is a Palestinian and the victim is a Jew; neither [Israeli military] or settler violence towards Palestinians is punishable, certainly not by demolishing Israeli Jewish homes.”