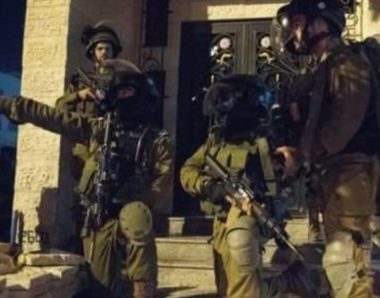 Israeli soldiers invaded, on Friday at dawn, Tulkarem refugee camp, in the northern West Bank city of Tulkarem, and stormed the home of a wounded Palestinian, who is suspected of carrying out a stabbing, Tuesday, and handed the family a demolition order for their home.

Media sources said several army jeeps invaded the refugee camp, before the soldiers stormed the family home of Mohammad Reesha, 19, and interrogated them for a few hours.

They added that the soldiers then handed the father a demolition order targeting his home.

Medics provided the needed treatment to many Palestinians, who suffered the effects of teargas inhalation and moved a few to a local hospital.

It is worth mentioning that Mohammad was shot by an Israeli civilian after he reportedly stabbed a woman, 62 years of age, in Kfar Saba city, causing moderate wounds. Mohammad was detained and was moved to Tel HaShomer Medical Center.

Israeli sources said the woman was stabbed seven times in the back and chest but did not suffer injuries to her internal organs before she was rushed to Meir Medica Center.

Article 33 of the Fourth Geneva Convention affirms that “no protected person may be punished for an offence he or she has not personally committed. Collective penalties and likewise, all measures of intimidation or of terrorism are prohibited.”