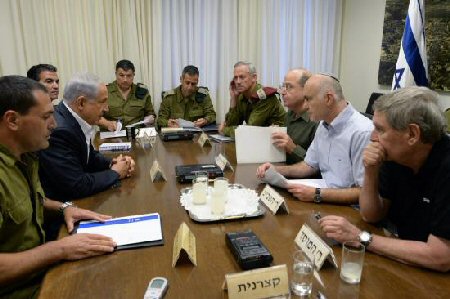 Leaders of the Israeli occupation army warned, during a cabinet session, of the gravity situation in the blockaded Gaza Strip, which could end up with the outbreak of a new armed confrontation with the Palestinian resistance factions.

According to Israeli Channel 2, ministers were told, at the cabinet meeting, that circumstances in the besieged Gaza Strip are on the verge of an explosion and are reminiscent of events that preceded the 2014 summer war.

Israeli senior officials warned ministers that the situation in the Gaza Strip is volatile and that, although Hamas had no interest in going to a new round of war, circumstances could drive to it.

Al Ray further reports that the assessment is based on a combination of the worsening humanitarian situation, failure to pay the salaries of employees in the Gaza Strip for several months, public disappointment over bogging down the reconciliation agreement, and the new developments regarding the Jerusalem.

The officials added that Hamas feels frustration at the Israeli army’s neutralization of its tunnels, and punishing it over a new round of rockets being fired into Israel, which could lead to the launching of another fight.

During the discussion, Israeli ministers provided possible solutions to prevent escalation, including the allowance of Gaza workers to work in settlements adjacent to the Strip; however, the Shin Bet opposes this, and is to formulate a plan, presenting it to the cabinet within three weeks.