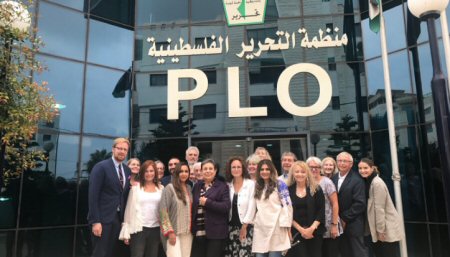 Dr. Hanan Ashrawi, member of the Executive Committee of the Palestine Liberation Organization (PLO), on Wednesday, warned against attempts to impose an economic or humanitarian solution on Gaza, or to separate it from the rest of the occupied West Bank (including East Jerusalem).

“A political solution based on legality, morality and rights is required to ensure a just peace,” Ashrawi told an Olive Tree Initiative delegation from the University of California she met with, at her office.

She provided the delegation with a brief analysis of the recent political, international and regional developments, and the dire and volatile situation throughout occupied Palestine.

In particular, she discussed Israel’s persistent breach of international law and Palestinian rights, including the continued expansion of the illegal settlement enterprise, its draconian measures in and around occupied Jerusalem, the continued theft of Palestinian lands and resources, the increase in home demolitions, and the deliberate targeting and killing of Palestinian protestors in the besieged Gaza Strip, according to a statement by Ashrawi’s office.

Ashrawi urged the visiting delegation to stand up and speak out courageously, against the US administration’s unconditional support of Israel and its unilateral moves that are antithetical to the requirements of a peace and stability based on international law and respect for human rights.

In a separate meeting, Ashrawi received at her office the Austrian Representative to the Palestinian Authority Andrea Nasi, WAFA further reports.

She briefed Nasi on the latest political and regional developments, as well as the internal situation in Palestine and the conclusions of the PLO Central Council meeting.

The purpose of the meeting with Nasi was to discuss Ashrawi’s upcoming official trip to Austria, in which she will conduct meetings with Austrian Foreign Minister Karin Kneissl and various members of the Austrian Parliament.