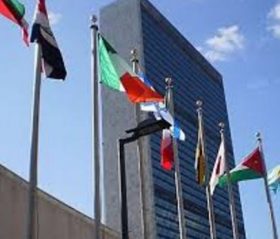 Awawdeh said such a decision is very serious as it represents a deep decline in morality and peace values, and is part of the duality in stances, especially when dealing with international issues and conflicts.

The official added that granting Israel such an important position, a committee that deals with sensitive topics, including fighting global terrorism, is a green light to Tel Aviv to continue its crimes and violations against the Palestinian people.

He added that this decision was just like allowing the Mafia to head an international committee that fights crime, and represents an official endorsement of Israel’s apartheid policies.

“They are granting a racist regime an important position in combating racism,” he said, “They are encouraging Israel, and giving it a green light to continue its violations, crimes and apartheid policies.”

Israel’s Ambassador to the United Nations, Danny Danon, is now the head of the UN Legal Committee, (officials referred to as the Sixth Committee). A Committee that, among other things, is tasked with fighting global terrorism, implementation of International Law and the Geneva Convention on the protection of civilians in times of war.

This marks the first time that Israel is tasked with heading a permanent UN Committee since it officially joined the organization in 1949.

On his part, Danon claimed that Israel was what he called a “world leader in international law and fighting terrorism.”

He added that this position would grant Israel an “uncompromising rejection” of what he called “any attempt to deny Tel Aviv of its legal rights,” Israeli Ynet News said.

While Danon continues to boast about Israel respecting human rights, international laws and agreements, his country continues its illegal occupation of Palestine, the ongoing violations against the civilians, in addition to the illegal construction and expansion of its colonies.

It continues to act in direct violation of International Law and the Fourth Geneva Convention, in addition to its continued disregard to every United Nations and Security Council resolution calling for ending the illegal occupation of Palestine, the complete withdrawal from all the occupied territories, and the Right of Return of the Palestinian refugees.