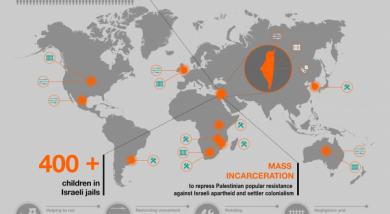 The United Nations Office for Project Services (UNOPS) in Jordan has not renewed its contract with security company G4S, following a campaign over the firm’s role in Israeli human rights abuses, the BDS national movement has reported.

The UNOPS in Jordan contract with G4S was worth more than $50,000 in 2014 but UNOPS has now hired a new security service provider to provide security services at its Amman office.

In light of the ongoing #UNDropG4S campaign, the Jordan branches of UNHCR and UNICEF both recently distanced themselves from G4S.

G4S has a contract with the Israeli Prison Service to provide services and equipment to prisons where Palestinians are held without trial and subjected to torture.

Backed by hundreds of organisations from across the world, the #UNdropG4S campaign is urging the UN to drop all of its contracts with G4S. UN’s data shows spent more than $22 million on services provided by G4S in 2014.

With the BDS campaign costing it contracts worth millions of dollars, G4S recently announced that it wanted to sell its Israeli business, but is still yet to do so.

Guman Mussa, Arab world coordinator with the Palestinian BDS National Committee, the coalition of Palestinian organisations that works to guide and supports the BDS movement, said:

“It’s significant that UN agencies appear to be recognising that having contracts with firms that help Israel to oppress Palestinians like G4S contradicts the UN’s principles. We urge Ban Ki-moon to ban G4S from being awarded any further UN contracts.”

“This year’s Palestinian political prisoners day came as Israel intensifies its use of mass incarceration as a way of deterring Palestinians from resisting its regime of occupation, settler colonialism and apartheid. G4S continues to profit from Israel’s checkpoints, use of torture and mass incarceration.”

“The fact that G4S has announced it wants to sell its Israeli business shows that our campaign is having a huge impact. But the company has a track record of saying one thing and doing another so we have to keep the pressure up until they actually end their complicity in Israel’s human rights abuses.”

“The continued growth of of the G4S campaign in the Arab world and in Latin America will be particularly concerning to G4S as the company has identified both regions as important growth areas in its strategy. G4S’ revenue in Arab countries five times higher than its revenue in Israel.”

“This is another positive step but we urge the UN and specifically in Jordan the UNDP, World Food Program and UN Women to follow suit. All UN agencies must end their contracts with G4S due to its continued violation of international law and the UN Guiding Principles on Business and Human Rights.”

There are now more than 7,000 Palestinians in Israeli jails including 400 children and 670 people held in administrative detention, a form of detention without trial.

G4S recently announced, according to the PNN, that it wanted to sell its Israeli business but is still yet to do so. The company has broken its previous pledges to end its involvement in Israeli crimes.

The international campaign against G4S has persuaded the Jordan branches of Unicef and UNHCR, universities, charities and banks to cancel their contract with G4S, costing the company millions of dollars. In 2014, the Bill Gates Foundation sold its shares in G4S following a public campaign.

In April 2012, G4S issued a statement pledging that by 2015 it would exit a number of contracts which involved the servicing of Israeli security equipment at the Wall checkpoints, a prison and a police station in the occupied West Bank. It has failed to implement this commitment.

In June 2014, G4S told shareholders that it “did not intend” to renew its contract with the Israel Prison Service when it expired during 2017.

According to research group Who Profits, G4S continues to have contracts with the Israeli Prison Service.