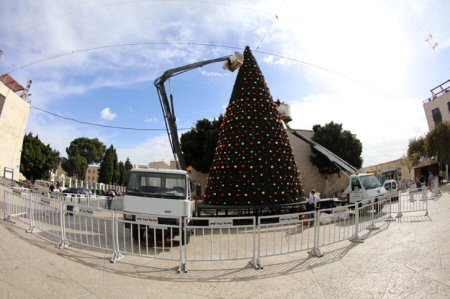 Preparing the Christmas tree in Bethlehem’s Manger Square, outside the Church of Nativity, where Jesus Christ is believed to have been born. (WAFA Images / Ahmad Mizher)

Preparations are underway, by the City of Bethlehem, to celebrate Christmas 2018, according to Palestinian officials.

Fadi Ghattas, head of the municipality’s media department, said the city has started to erect and decorate the 17.5 meters high Christmas tree, as well as Manger Square and the streets and neighborhoods nearby.

He told WAFA that preparations started a few days ago to get the city of Bethlehem ready, particularly Manger Square and the area around the Church of Nativity, by placing the Christmas tree in Manger Square and decorating the streets.

He pointed out that official celebrations will begin in conjunction with the holding of the traditional annual press conference on Thursday ,at the Peace Center in Manger Square, followed by the lighting of the Christmas tree on December 1, in the presence of Prime Minister Rami Hamdallah and at least 12,000 citizens, guests and visitors, including 400 European figures representing cities that have twinned with the City of Bethlehem.

On Sunday, December 2nd, the annual Christmas market, with 40 kiosks selling all kinds of holiday items, will be inaugurated at Nativity Square

A Santa village will also be set up in the Nativity Square for one week, for the children and the families.