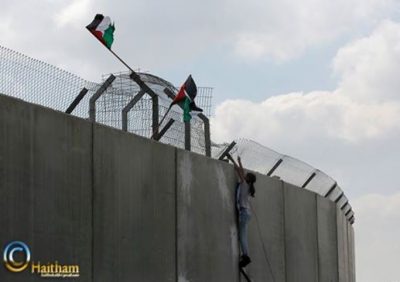 Dozens of Palestinians, accompanied by Israeli and international peace activists, marched in the village of Bil’in, west of Ramallah, holding the weekly nonviolent protest against Israel’s illegal Annexation Wall and colonies, and marking the 69th anniversary of Deir Yassin massacre.

The soldiers used a surveillance drone to film the protesters, before assaulting them, while several local youths burnt tired near the gate of the Annexation Wall, separating the villages from their lands and orchards.

The protesters marched carrying Palestinian flags, and chanting for national unity, ending the Israeli occupation and the removal of its colonies from Palestine, in addition to the release of all political prisoners.

The protest also commemorates the 69th anniversary of Deir Yassin massacre; the Popular Committee in Bil’in said Israel’s history since its establishment in the historic land of Palestine, until this day, has been a history of ongoing bloodshed, massacres and oppression against the indigenous Palestinian population.

The committee called on the international community, all legal and human rights groups, to prosecute Israel in international courts for its ongoing crimes against the Palestinian people.