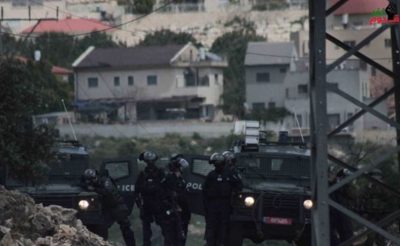 Morad Eshteiwy, the media coordinator of the Popular Committee in Kufur Qaddoum, said the soldiers invaded the town, and fired rubber-coated steel bullets, and gas bombs, at the protestors.

He added the two young men were mildly wounded after being shot with rubber-coated steel bullets, while five others suffered the severe effects of teargas inhalation.

The protest marked the Palestinian Child’s Day, and was attended by dozens of residents, including many children, who carried signs calling for a safe childhood, and to be able to live in peace and dignity without the constant threat of the Israeli occupation, ongoing violations and its illegal colonies.