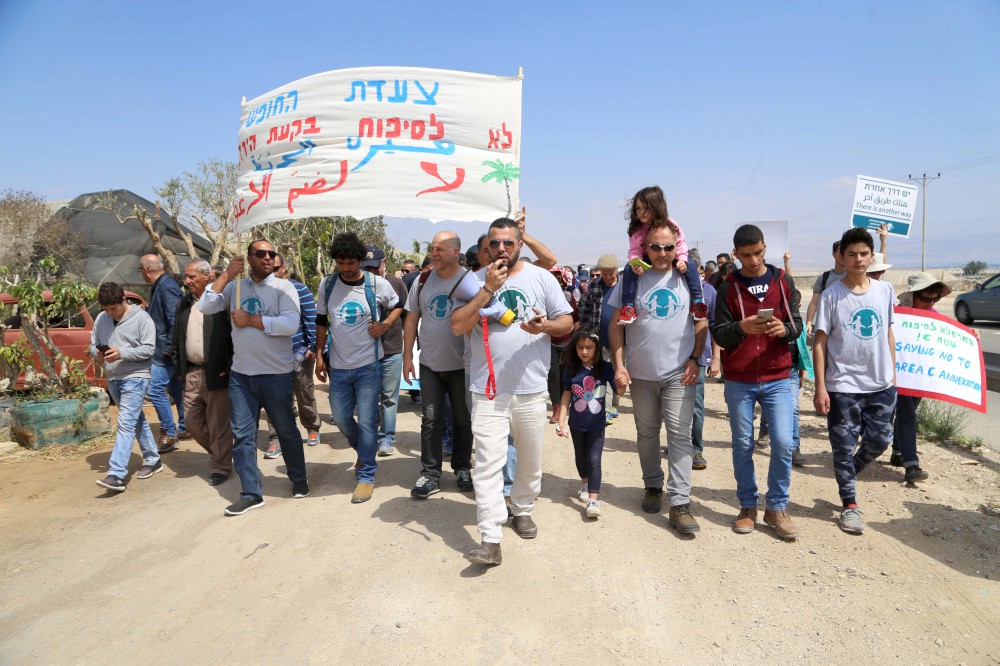 Scores of Palestinian and Israeli activists joined on Friday the Freedom March ““Stop Annexing the Jordan Valley” that was organized by Combatants for Peace movement. The protest started at the nearby settler road until the Palestinian Israeli Peace Farming project Ecome at the entrance of Jericho city. At the start of the protest Israeli troops and police tried to stop however the protesters kept marching chanting slogans against occupation, settlements and calling to stop the Israeli annexation of the Jordan Valley. The protest ended with speeches by the organizers. “The occupation is implementing a policy of apartheid against Palestinians in the Jordan valley and area C of the West Bank. Soldiers demolish homes leaving Palestinian families and children without shelter under the burning sun, they also deny Palestinians access of water resources in a time the occupation keep building new settlements and provide them with all infrastructure and protection.”   Said Noga Herbaz, the Israeli coordinator for the Jerusalem – Jericho group in CFP in her speech. From his part, Osama Elewat, the Palestinian coordinator for the Jerusalem – Jericho group in CFP, told the gathering:

“This is the first freedom march in the Jordan valley that the occupation control 84% of its lands and 80% of its water and when we use water for our daily life they accuse us of steeling. We in Combatants for Peace movement are committed to the nonviolent struggle to end the occupation and achieve peace.” That last speech was by Atalya Ben Abba, an Israeli Peace activist that refused military service for her anti occupation views, she said:

“Many people think I feel alone and isolated in jail, but when I see you that gives me a great feeling and support to continue.”

Combatants for Peace, in coordination with a number of Palestinian and Israeli peace groups organizes the nonviolent Freedom March on the first Friday of every month to protest the occupation and violence. CFP uses nonviolent means and call on both nations to join us to achieve peace and reconciliation between Palestinians and Israelis.