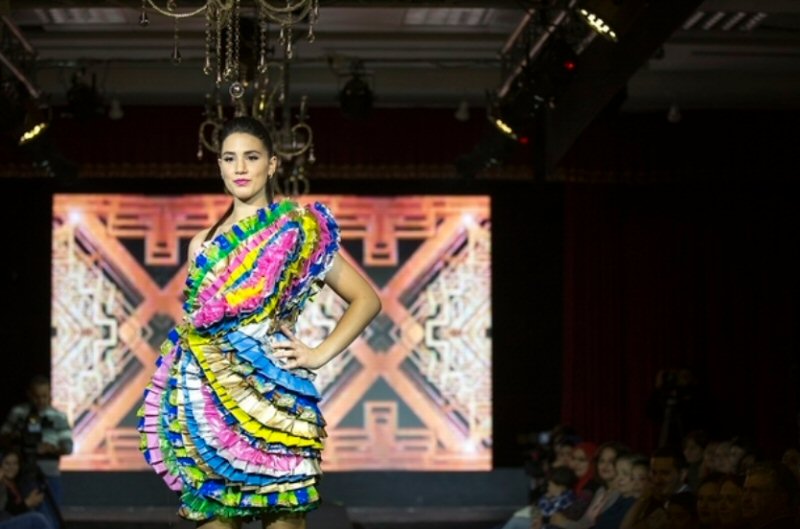 Rather than having their creations in the pages of high-end fashion magazines such as Vogue, some Palestinian designers are incorporating these very pages into their designs.

Palestinian runways are now being graced with multi-coloured dresses of recycled material including discarded plastic, rolled up pages from sophisticated fashion magazines, and even hundreds of matchsticks painted into a cascading rainbow.

The 22-year-old from the West Bank city of Nablus is attempting to reshape local perceptions of embroidery use by repurposing and upcycling second-hand material and sewing it into both male and female clothes, especially jackets.

“Traditionally, embroidery is for females. It’s not common for men to wear embroidery,” A’llewy tells Middle East Eye. “So I’m trying to make something different, and to make people realise it’s not just for females.”

By using recycled materials in his designs, A’llewy says he hopes to reduce waste and encourage people to try something different.

Eco-friendly trends are not common in the West Bank, which has been under Israeli occupation since the Six-Day War in 1967. Although Israel has at least 15 waste treatment facilities in the West Bank, they recycle waste produced mostly inside Israel and not the West Bank, according to a 2017 report by Israeli human rights group B’Tselem.

Yet according to the report, the downside of six of these waste treatment facilities is that hazardous waste is a by-product, potentially harming the environment and posing health risks for Palestinians.

For the Palestinian communities that have tried to create essential infrastructure, such as waste treatment facilities, the initiatives have mostly been in vain as the Israeli occupation stands in the way of developing such projects.

Although A’llewy wants to focus on designs using recycled materials, he says he faces many challenges with the local community, due to lack of awareness.

“People aren’t conscious enough to buy a product that is recycled by me … they just aren’t into buying handmade, second-hand products,” he explains.

A’llewy recalls comments on Facebook by users on his designs, referring to it as collected rubbish.

“It’s not possible to change how people think, it’s difficult, but I have hope,” A’llewy says.

The interest in using recycled materials in fashion design has been slowly growing across the world in recent years.

“Fast fashion” – cheap clothes that are quickly discarded at the end of the season or trend cycle to encourage customers to buy more – has harmed the environment and increased waste across the globe.

Some of the world’s largest clothing brands like H&M and Zara have stepped into recycling initiatives by encouraging shoppers to drop off their old clothes. While the latter donates them to charities, H&M transforms them into its new Conscious Collection.

Synthetic fibres such as Tactel and plastic that are commonly used in clothes are essentially made from petroleum and can take up to 1,000 years to decompose.

When thrown out and buried in a landfill, clothing made of natural fibres produces methane, a greenhouse gas more potent than carbon dioxide, which contributes to global warming.

According to a 2017 report by the Ellen MacArthur Foundation, textile production emits 1.2 billion tonnes of greenhouse gases annually, more than all of the gases from international flights and maritime shipping combined. And less than 1 percent of unwanted clothes are currently being recycled today.

Hussam Omari, 25, who is from Jenin in the far north of the West Bank, has been a fashion designer since 2014. Late last year he started experimenting with recycled materials in his creations.

“I practise [designing with recycled material] because I think it’s more eye-catching and gives me a special name,” Omari says.

But Omari also cares about the positive impact sustainable fashion has on reducing waste.

“[There should be] a culture to preserve the environment at its best and utilise materials that can be recycled,” he says.

A’llewy and Omari first met in 2014, when they started studying fashion design at Khdorey University in Tulkarem in the West Bank.

A’llewy and Omari have shown their recycled designs in fashion shows across Palestine – starting with university runways, to being part of a fashion showcase at the auditorium of the private “Friends School” in Ramallah, and more recently taking part in a solely recycled fashion show at the opening of the Qattan Foundation cultural centre in Ramallah.

Omari sells his clothes at Stella Fashion in his hometown of Jenin, which he has owned for two years, though most of the time he gets custom orders. The average cost of his clothes is $50.

He is also currently working on a collection using recycled materials to be distributed to Dubai by the company Moda Corner. From there, he will also be able to distribute internationally and reach a greater market of customers looking for unique evening wear through Moda Corner’s website.

A’llewy, who currently sells solely online or directly to customers, hopes to open a fashion house in Nablus to encourage Palestinian fashion designers to work together in a central space. He is now preparing a new recycled collection, consisting mainly of jackets with patched, recycled, embroidery artworks.

Maha Shaltaf, 54, is a Palestinian fashion designer living in Ramallah, the de-facto Palestinian capital of the West Bank.

Shaltaf has been designing clothes for 30 years, beginning with repurposing old clothes for her and her daughters and then redesigning them.

Nowadays, she has made a name for herself and people around Palestine come to her for her recycled designs.

“I often use existing, traditional, Palestinian embroidery to put on accessories like handbags, as well as mixing [second-hand] jeans or leather and even using [old] beads [in my designs],” Shaltaf explains.

“I think it’s bad to keep throwing clothes out, and money-wise it’s not conscious to keep spending money on clothes.”

Her clothing designs, in comparison to Omari and A’llewy, are always focused on satisfying her customers.

“I make stuff for people to wear, even if it’s on the runway,” Shaltaf says. “I want [my customers] to be happy.”

Shaltaf’s sales don’t often come from her creations on the runway, such as the AM Qattan recycled fashion show she participated in back in June.

“Some are too heavy, or they can’t move in it, that’s the reason they won’t buy it,” says Shaltaf, who usually sells her clothes at local artisan markets.

The majority of Shaltaf’s recycled clothing sales come from custom orders via word of mouth, including a dress made with thrown-out soda cans pinned as a circular decoration, which a customer wanted to wear to their son’s wedding.

All three of the fashion designers first met in October 2017, after being selected to participate in a workshop in sustainable fashion run by the Ramallah based AM Qattan Foundation.

According to Qattan’s communication and public relations director, Nader Dagher, the workshop gave local designers the opportunity to receive high-level expertise from prominent Palestinian designer Rami Kashou, who is from the American TV series Project Runway.

“We also meant to promote recycling culture in an artistic outcome that is interesting to people.

“It is important to also promote this sector of fashion design as an art and industry, and think of it as something we can produce, not only consume/import,” Dagher says.

The biggest challenge of the workshop for Shaltaf was to work with solid materials such as newspapers, recycled bottle caps, plastic chocolate wrappers and soda can openers.

From these materials, Shaltaf transformed the recycled bottle caps by pinning them into polka-dot style jackets and the chocolate wrappers were twisted into a ruffle dress resembling a pinata.

While Shaltaf wishes to open her own shop, she is first looking for someone to help her with the labour of sewing her designs.

“I really enjoy making nothing into something.”

Human Interest 11/26/18 On World Day for Elimination of Violence against Women, Open Call to International Community to Offer Protection to Palestinian Women