BTS: “You Force People the Age of Your Grandma Out of Some Tin Shed Where They Live”

“We went to Umm al-Khair, which is right up next to [the settlement of] Carmel. We went there for a demolition. We demolished a shed or two in there. You get an order about what to demolish, you coordinate it with the brigade, and you do it.

Every demolition we do, you bring people to move stuff and you carry the contents out, put them at a distance from the demolition site, take footage inside and around the empty structure that we’re going to destroy. We walk through the structure to see that there’s nothing valuable left inside of it, or anyone inside it, and only after that we demolish it. 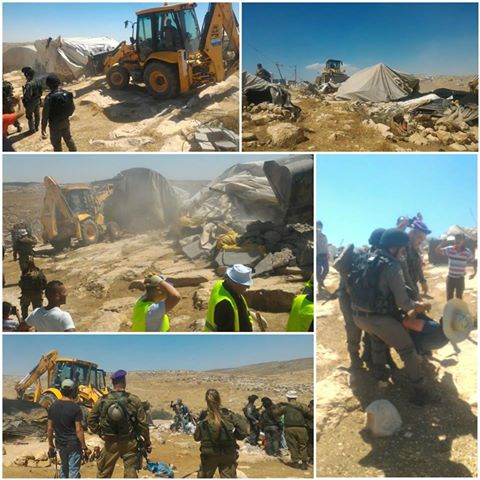 Any claims that goats were killed, that things like that were destroyed – are total fabrications; I tell you this with certainty. I don’t agree with the demolition activities, and I think that in most cases they are wrong – simply not humane. Would I say that I’m at peace with what I did while I was in the army? No. But, would I say that we adhered to working according to the protocols, down to the smallest detail? Yes, we did. We adhered to them and we knew them, and there had already been cases that the civil administration was sued because it demolished and wrecked things by accident.

No structure was demolished with its contents still inside, ever. We never demolished a single house without clearing out its contents first. [One time,] we went to Umm al-Khair, and there was a disagreeable demolition. The village’s sheikh, he lay there in front of the tractor, and we had to get the border police to pull him away, there was cursing and yelling. In the end he came up to us and asked, “Do you hear the tractors working in the new neighborhood in Carmel? What’s that?” And we told him, “They’re building with an approved plan, you aren’t.” He goes, “Does that sound just, to you?” And we told him, “That’s the way it is.”

And, you know that the new neighborhood was indeed approved, and it had a plan and they were working according to the plan and everything. But, that man, who lives five meters from their fence and is illegal according to the administration’s definitions, that’s a problem. It’s an unpleasant situation: To force old people, children, women out of their homes. To do it day after day. It’s a difficult situation, a bad situation. You evacuate people the age of your grandma out of some tin shed where they live, onto a pile of rocks, and it breaks your heart.