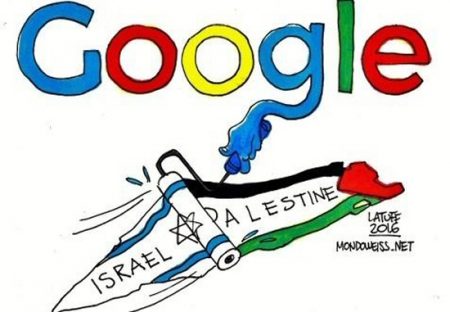 Palestinian journalists and activists have launched a campaign to demand that Google add “Palestine” to the Google Maps application instead of “Israel”.

The Forum of Palestinian Journalists issued a statement refusing the deletion of Palestine from the map, and calling upon Google to delete Israel since it is an occupying entity.

Claiming it was all a result of a bug, a Google spokesperson said that Palestine used to appear by clicking on some distinctive marks in the occupied West Bank and the Gaza Strip.

She added, according to the PNN, that they are working on solving the problem and restoring these distinctive marks. Google Maps does not include the name “Palestine”, although 136 countries in the UN recognize the State of Palestine.

Palestinian activists launched the hashtag #HereIsPalestine to condemn the deletion of Palestine. Activist Mohammed Bassif expressed his doubts regarding what Google reported to be a technical problem.

The journalists are seeking to pressure Google through signing a petition by Google Maps users to demand Google add Palestine to the map.

The number of supporters have reached 300,000 in the first 24 hours. At change.org, users can sign the petition by clicking on (GOOGLE: Put Palestine On Your Maps!)

According to the Palestinian journalists, such incidents remind the people of how important the technology is in affecting the understanding of the world.