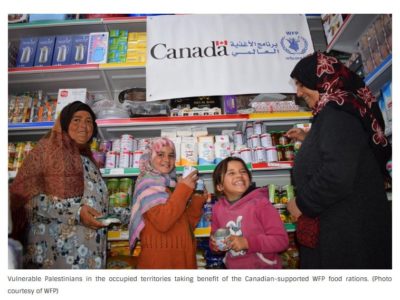 The Palestinian News & Info Agency (WAFA): JERUSALEM, Thursday, May 09, 2019 – The Government of Canada has provided the United Nations World Food Program (WFP) with a contribution of CAD$3.2 million (approximately US$2.4 million) to support 128,000 vulnerable Palestinians in Gaza and the West Bank, according to a press release.

WFP will use the funds to meet basic food needs of 91,000 food-insecure non-refugees in Gaza through electronic vouchers for around one and a half months and 37,000 vulnerable Bedouin and herders in the West Bank for three months.

“We’re grateful for Canada’s commitment to provide food assistance to the most vulnerable Palestinians,” said WFP Representative and Country Director Stephen Kearney. “Continued food assistance is critical as the number of food-insecure people in Palestine is on the rise with people having to skip meals, take on debts and count on the support of neighbors and friends.”

WFP assists the non-refugee communities in Gaza and the West Bank who are most acutely hit by the lack of jobs and who receive less than US$1 a day to cover basic housing, clothing and food needs.

WFP will use part of this contribution to organize nutrition and health awareness sessions where families can learn how to prepare healthy and vitamin-rich meals using their WFP food entitlements. Special attention will be given to pregnant and nursing mothers and caregivers of children under the age of five years.

“WFP is a long standing and trusted partner. In addition to WFP’s important work meeting the basic food needs of poor men and women in the West Bank, East Jerusalem and Gaza, Canada values WFP’s impact on the local economy – promoting local farmers, food processors, and shops,” said Representative of Canada to the Palestinian Authority Douglas Scott Proudfoot. “Working with partners such as WFP that advance gender equality and the empowerment of women and girls is a key priority for Canada.”

Under the terms of its four-year plan in Palestine, WFP aims to provide food assistance to 360,000 of the people most affected by food insecurity, primarily in Gaza and Area C of the West Bank. WFP has been expanding the use of electronic vouchers based on evidence showing their positive impact on people’s food security and on the local economy. Since 2011, WFP has invested more than US$210 million into the Palestinian economy through food vouchers.