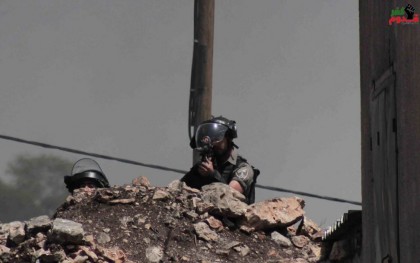 He added that one child, 15 years of age, was shot in his left arm, and received the needed treatment by Red Crescent medics. Many Palestinians suffered the effects of tear gas inhalation.

Local youths managed to uncover an ambush by the soldiers, who hid in an abandon farm in an attempt to kidnap protesters, leading to clashes between the army and youngsters in the town.

Also on Friday, the soldiers attacked the weekly nonviolent protest against the Annexation Wall and colonies, in Bil’in village near Ramallah, causing dozens to suffer the effects of tear gas inhalation.