Christmas Tree Lighting in Bethlehem in Midst of Pandemic & Occupation 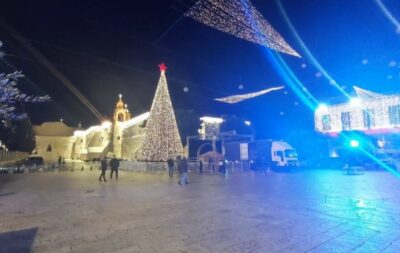 The city of Bethlehem, revered by Christians worldwide as the birthplace of Jesus, held its annual Christmas Tree Lighting Ceremony on Saturday in a manner that was much more subdued than usual, with Palestinian leaders taking part in the event through video conferencing, and only a few in-person participants.

The COVID-19 virus has been surging in Bethlehem recently, with a rapid spike in the number of cases. For this reason, and in the midst of the ongoing Israeli military occupation of the entire West Bank, the municipality of Bethlehem thought it wise to make the annual Christmas-tree lighting a mainly virtual event.

Palestinian Prime Minister Mohammad Shtayyeh gave a speech via video call, saying, “We welcome a new year, in which we can end the divisions between Palestinians, and be united in confronting the [Israeli military] occupation.”

Shtayyeh also stated, “Together, we defeated international plans to annex our land and legalize settlements, and we will continue to work together to defeat the Israeli settlement and occupation of our land. We, the Palestinian people, have demonstrated to the world what steadfastness can look like in the face of a colonial occupation and pandemic.” The Mayor of Bethlehem Anton Salman also spoke, saying, “As the Christmas season comes upon us this year, the world is suffering under the yoke of injustice, persecution and disease. So it is our duty to keep the Christmas message flying in the sky of Bethlehem, so the world can know that good news is coming, and relief will soon be coming. Soon, humanity will be able to recover from the pain and suffering from the coronavirus. ”

He said that this year, “We wanted this celebration to follow in our untouched tradition, but in a new style that we have never seen before. So we are using modern technology to allow the whole world to participate virtually in the lighting of the Christmas tree. We hope that this experience will bring both hope and optimism to flutter around Palestine and the world. ”

Bethlehem Mayor Anton Salman also stated, “The Palestinian people remain steadfast, and we will endure, challenge and resist the Israeli occupation, seeking our national rights with determination, affirming our right to self-determination and the establishment of an independent Palestinian state on the borders of 1967, with East Jerusalem as its capital.”

In his speech, he condemned the Israeli arson attack on the previous day targeting the Church of Gethsemane / Church of All Nations in Jerusalem. He said, “We affirm to the world our commitment to the principles of freedom of religion, conscience and opinion for all, and we categorically reject attacks on religious symbols and places of worship.”

Also participating in the virtual ceremony were the Minister of Tourism and Antiquities Rola Maayah, and the Governor of Bethlehem Kamel Hamid.

This is the first time the tree in Bethlehem was lit without a large crowd of revelers present at the ceremony.

The ceremony began with the Palestinian national anthem, and included a presentation of the Christmas story and a theater performance entitled “Star of Bethlehem”.

The Christmas tree in Beit Jala, the town next to Bethlehem, was lit in a simultaneous ceremony with Bethlehem’s.