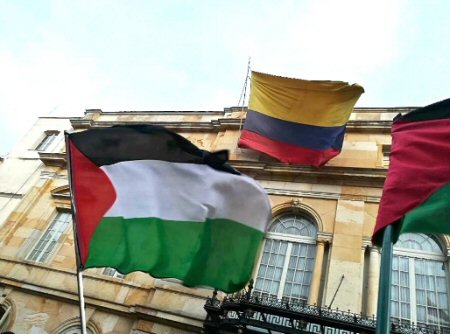 Colombia has reportedly decided to recognize Palestine as a sovereign state, only days before Ivan Duque took office, according to an official letter by the Minister of Foreign Affairs of Colombia, Aria Angela Holguin, to the Palestinian Foreign Minister, Riyad al-Malki.

The recognition came a few days before the end of President Juan Santos’ term in office, and before the newly-elected president, Ivan Duque, assumes office officially and was approved by Duque himself.

The letter, handed to al-Malki, stated that “the President of the Republic of Colombia has decided to recognize the State of Palestine.”

The letter added, according to Ma’an, that President Santos decided to recognize Palestine as a “free, independent, sovereign state.”

In response to the letter, a Palestine representative said in a statement “we thank the Colombian government for this decision and we are sure that it will contribute significantly to generating the necessary conditions in the search for peace in the Middle East.”

The embassy of Israel in Bogota said it was “surprised and disappointed.”

The Israeli embassy posted on its Twitter account a post saying “we ask the Colombian government to reverse the decision made by the previous administration in its last days, which contravenes the close relations, extensive cooperation in vital areas and interests of both countries.”

This decision came after many years of intensive efforts exerted by the Palestinian foreign ministry, as well as by Palestine’s diplomatic mission in Colombia.

Up until now, Colombia was the only South American country that did not recognize the State of Palestine.

Palestine has been recognized as a sovereign state by more than 130 countries, the United Nations general Assembly, and the International Criminal Court (ICC).

Palestine seeks to create its own state in Gaza, the West Bank and East Jerusalem, lobbying for a return to the pre-1967 borders.