Palestinian Poet Dareen Tatour Turns Herself In to Finish Sentence 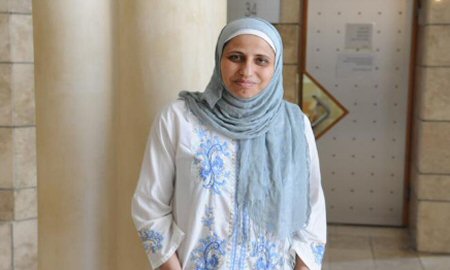 The Palestinian poet, photographer and social media activist Dareen Tatour, from the town of Reineh, in northern Israel, turned herself in on Wednesday, to the Israel Prison Service, to serve two months that were left of her five-month prison sentence, according local sources.

An Israeli court had earlier sentence Tatour, 36, a Palestinian-Israeli citizen, to five months in prison for a poem she published on social media titled “Resist. my people, resist them”, which Israel claimed it included incitement to violence.

However, after already being held for three months in prison and two years and a half under house detention, Tatour, who was first detained on October 11, 2015 during pre-dawn raid at her home, was left with only two months to serve.

Dozens of Palestinians and supporters had gathered at Tatour’s Reineh home to bid her farewell as she left her house to serve her prison term, Al Ray reports.

Tatour thanked her supporters, whom she said have not left her for one moment during her ordeal.

The poet stressed that she was on trial for her political views, saying, “This proves that Israel is a democracy for Jews only, and that freedom of expression is confined to one type of people, in this state that oppresses the Arabs who thought they live in a law-abiding country.”