Cousin of Palestinian Medic Killed by Israel Speaks Out 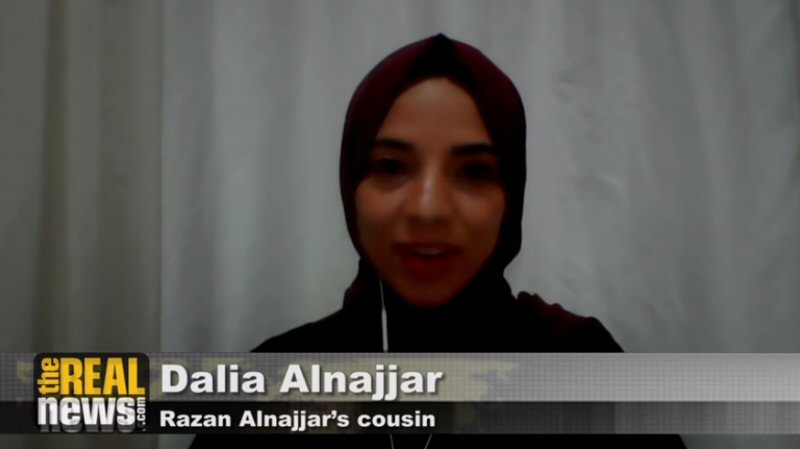 Palestinian nurse Razan al-Najar was shot and killed by an Israeli sniper, in Gaza, while she was wearing a white medic’s uniform and had her hands raised. Dalia al-Najjar says her cousin “Razan showed everyone what it is to want freedom.” She tells TRNN’s Ben Norton, “Everyone is joining the protests because people want their freedom, and it’s a legitimate right for them to ask for it.”

Tens of thousands of Palestinians in the Israeli-besieged Gaza Strip have held demonstrations on a regular basis since March 30 as part of what they call the Great March of Return, demanding the right of return Palestinian refugees are guaranteed under international law, as well as an end to Israel’s illegal and crippling blockade of Gaza. Israel has responded with merciless violence, injuring more than 10000 Palestinians, killing at least 120 people. Israeli snipers have intentionally shot journalists, medics, children, and other unarmed protesters. And the IDF posted on Twitter, quote: “We know where every bullet landed.”.

On June 1, the Israeli government’s brutality has shocked the world after the IDF shot and killed the 21-year-old Palestinian medic Razan al-Najjar. Razan had spent weeks treating protesters wounded by the Israeli military. She was clearly wearing a white medic’s vest, and had her hands up in the air, walking toward the injured person to treat them, when an Israeli sniper shot Razan in the chest, killing her. Then on June 4, the Israeli military killed another member of the al-Najjar family, Ramzi, the cousin of Razan.

Joining us today to discuss this horrific tragedy in Gaza is Razan’s cousin, Dalia al-Najjar. Thanks so much for joining us, Dalia, and I’m sorry for the losses.

BEN NORTON: So can you just please talk about Razan? You know, she dedicated her life to try to help people and treat them when they were wounded. Can you just talk about your memories of her?

DALIA AL-NAJJAR: Yeah. Well, Razan was a great daughter, and a caring sister, a loving friend, and a professional nurse. She was a source of inspiration and positivity to many. She always tried her best to make everyone happy around her. In a talk with her family yesterday, they told me that they didn’t just lose a daughter, but they lost a best friend. She was really close to everyone of her family. And she really cared, too. She tried her best to make them happy. For example, she sold personal belongings often to try to get new clothes to her siblings.

For her, she really loved life. And this is why she got into nursing. Getting into nursing was a dream come true for her. She, she wanted to take care of people, to make sure that they live healthy and they get a life, basically. So it was really hard for her to get a degree in nursing because of the hard financial situation of her family. So she dropped out of school, and then she got training. She trained and worked as a volunteer for two years in another hospital in Khan Yunis without getting paid anything.

When the protests started, or the Great Return March started, she went there every, every week to try to help as much as possible. As you’ve seen in her interviews she, she was brave, and she was one of the first female responders. And everyone, everyone challenged her at the beginning, as a female medic. But she kept it together, she kept fighting, and she said that the society needs to accept us as female, proving that women have a great role to do in the conflict, and in the Middle East in general.

She even sold personal belongings to buy medical supplies for, for the wounded during the march, which is absolutely amazing. She showed not only how courageous she is but how selfless she is, and how caring for life she is. She wanted everyone to live. And even though she got in different, multiple injured, she kept working on very long shifts. And she would go home every, every day with a different injury, with, with her clothes, with a lot of blood in her clothes. And she was telling her mom, it’s fine. I’m fine. I needed to save someone else’s daughter and someone else’s son. So this is what was she trying to do.

BEN NORTON: Yeah. And we actually have a video clip here of an interview that Razan did just before she was killed, talking about some of the treatment she was doing for people who are wounded, Palestinians who are wounded in these protests. Here, we’ll play this clip.

RAZAN AL-NAJJAR: Today I was almost shot, but thanks to God’s mercy I was safe. And also yesterday I suffocated from tear gas, and I fainted for about an hour. I woke up in an ambulance, and I left it. I went crazy because I wanted to continue my work and my journey. I came to give care, not get care. With all pride, I want to continue to the last day.

BEN NORTON: Yeah, I think that clip shows, it’s amazing how brave and how dedicated she was. It also shows a kind of determination. You know, Palestinians talk about Sumud, the steadfastness to always resist oppression and fight for freedom, and help people who are oppressed and people who are wounded. Can you just talk about how Razan’s life reflected that, and overall the Palestinian struggle for equal rights?

DALIA AL-NAJJAR: Well Razan showed everyone what is it, to be, to want freedom. And this, this emerges from our desire to life, and to live in dignity and to have our freedom, and to live in a better future. And this is why everyone is joining the protest, because people want their freedom, and it’s a legitimate right for them to ask for it.

You know, Razan, everyone in the field, other first responders were motivated by Razan. One day she broke her wrist, yet she completed her shift. So whenever anyone in the field felt tired or whatever, they would tell him, look, Razan broke her wrist, yet she completed her, her shift. Come on, you can do it, too. And everyone was motivated by her, which is, which is something absolutely inspiring.

And, and this is why we need to, to make sure that Razan is not just, just another face that we lose. It’s someone that fought for a lot of legitimate things and legitimate rights, and we need to support that and to make sure that the things that people are asking at the protest are being answered. They are asking for freedom. They’re asking for ending the occupation and ending the blockade on Gaza. I mean, in such difficult times there’s nothing I want more than being with my family, and to make sure that they are feeling better. And for me to actually heal. But I can’t go because of the blockade, which is, make things really really bad for me.

BEN NORTON: Yeah. And then quickly here I’ll talk about the international response. The United Nations Special Coordinator for Middle East Peace Process condemned the attack, the killing of Razan. This is the U.N. Middle East envoy. He tweeted, quote: “Medical workers are not a target. My thoughts and prayers go out to the family of Razan al-Najjar. Palestinians in Gaza have had enough suffering,” end quote. Also, at the U.N. Security Council, several nations try to take action, but the United States vetoed a proposal, a proposed resolution that condemned the Israeli military as, quote, excessive, disproportionate, and indiscriminate force. So international institutions have been trying to take action here, to advocate on behalf of Palestinian rights. And for two months now the protests have gone on.

Just in your final concluding thoughts here, Dalia, what do you think, you know, the response will be? We’ve already seen, many countries have at least verbally supported Palestinian human rights, given these protests. You know, do you think that eventually, you know, the protests will succeed and Palestinians will be guaranteed these rights that they are supposed to be guaranteed under international law? What do you think, what are your hopes for the future?

DALIA AL-NAJJAR: Well, it’s great that the international community is overwhelmingly supporting the Palestinians. However, the inability to overcome the American veto against any resolution that supports Palestinians is a critical thing that political leaders need to address. It’s time to, to make sure that justice takes place, and the rights of the Palestinians are protected. Leaders need to do more than maybe [lipswork] and get to the ground and try to find ways to overcome the American veto, and whatever America does to protect Israel or to apologize for what Israel is doing on the ground in Palestine.

BEN NORTON: Well, we’ll have to end our conversation there. I was joined by Dalia al-Najjar. She is the cousin of Razan al-Najjar, who was a medic, a Palestinian medic in Gaza, a 21-year-old who was killed while wearing a white medic’s uniform in the Gaza Strip, treating wounded people. She had her hands up and was shot by an Israeli sniper. Also Ramzi al-Najjar, another cousin, was killed on June 4. Thanks so much for joining us, Dalia, and we’re all thinking of you and so many other families who have lost loved ones in Gaza.