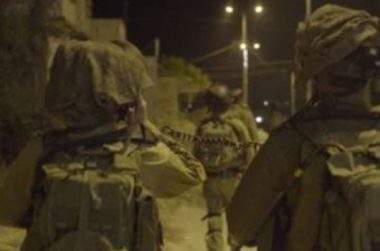 They added that the soldiers fired rubber-coated steel bullets, gas bombs and concussion grenades at Palestinian protesters, causing many to suffer the effects of teargas inhalation.

In related news, the soldiers invaded homes of Palestinians from Sabarna family, and confiscated their work and entry permits into occupied Jerusalem, because they are related to Rami Sabarna, 36, the Palestinian worker who was killed by Israeli army fire in Hebron, on June 2nd.

It is worth mentioning that the Israeli army is still holding Sabarna’s body and refusing to transfer it to his family.

In addition, the soldiers invaded many homes of former political prisoners,  in Hebron city, and violently searched them.