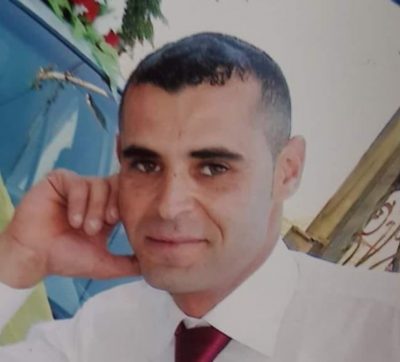 Israeli soldiers killed, Saturday, a Palestinian worker in Hebron, in the southern part of the occupied West Bank, while he and other workers were conducting work for the Hebron City Council to rehabilitate and expand a road near the Ibrahimi Mosque.

The Health Ministry in Hebron said the soldiers fatally shot Rami Wahid Hasan Sabarna, 36, in Jaber neighborhood in the Old City, near the military roadblock leading to the Ibrahimi Mosque.

It added that the soldiers also stopped a Palestinian ambulance at the scene, and prevented the medics from approaching the Palestinian, before he bled to death.

An Israeli ambulance later arrived, before its medics placed Rami’s body in a black bag and took it away.

The army claimed that the Palestinian worker “attempted to ram the soldiers with his vehicle, before they shot him,” an allegation which was denied by eyewitnesses, who said the young man was just working, and did not attempt to attack the soldiers, or harm them in any way.

Aref Jaber, a local nonviolent activist against the Annexation Wall and Colonies, who lives near the area where the army killed the worker, said Sabarna was driving a small and loud bulldozer, and added that the worker passed by some soldiers who then started shouting at him an ordering him to stop.

“He did not pose any threat to them, he passed by them and could not hear their shouts and orders,” Aref said, “Then, they just opened fire at him and his bulldozer, seriously wounded him, before removing him from his vehicle and left him to bleed on the ground. When Red Crescent medics arrived, the soldiers prevented them from providing Sabarna with the urgently needed treatment, and he bled to death, before the soldiers placed his corpse in a black plastic bag and took him away.”

The soldiers also removed media outlets from the area, and prevented the journalist from performing their duties. Israeli soldiers killed, on Friday, a young Palestinian woman, a volunteer medic identified as Razan Ashraf Najjar, 22, and injured 100 Palestinians, including 40 with live fire, in the Gaza Strip.