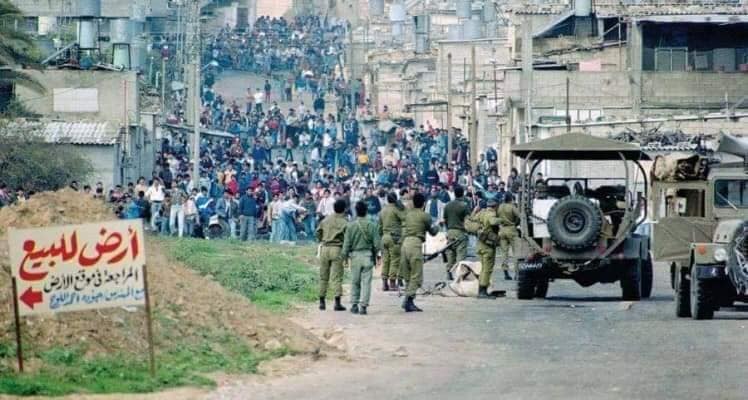 The First Palestinian Uprising or ‘Intifada’ broke out across occupied Palestine on December 8, 1987, lasting for more than six years, saw the deaths of thousands of Palestinians by Israeli occupation forces, and the detention of tens of thousands.

On that day 32 years ago, Israeli settler, Herzel Boukiza, rammed his vehicle into Palestinian workers returning home through the Erez/Beit Hanoun checkpoint between Israel and Gaza.

Four Palestinian workers from Jabalia and Maghazi in the Gaza Strip were killed in the attack, the Palestinian News and Info Agency (WAFA) reported.

The next day, December 9, 1987 and following the funerals of the four martyrs, angry Palestinians took to the streets in Jabalia to protest the premeditated attack.

As Palestinian leaders gathered to discuss the escalating situation, protests and clashes broke out within the refugee camps, spreading rapidly across the West Bank. Shopkeepers closed their businesses and laborers refused to go to their workplaces in Israel.

Palestinians took control of neighborhoods, barricading roads to prevent Israeli army vehicles from entering. Largely unarmed, they defended themselves only by throwing stones at the soldiers and their tanks.

After six years of daily confrontations in which the Israeli army killed a total of 1550 Palestinians, injured more than 70,000 by shattering bones and beatings, and detained 100,000 to 200,000.

Over 18,000 Palestinians were held under administrative detention for long periods of time without charge or trial, a practice Israel continues to utilize.