Mai and Jacqueline: Returning Home With One Eye 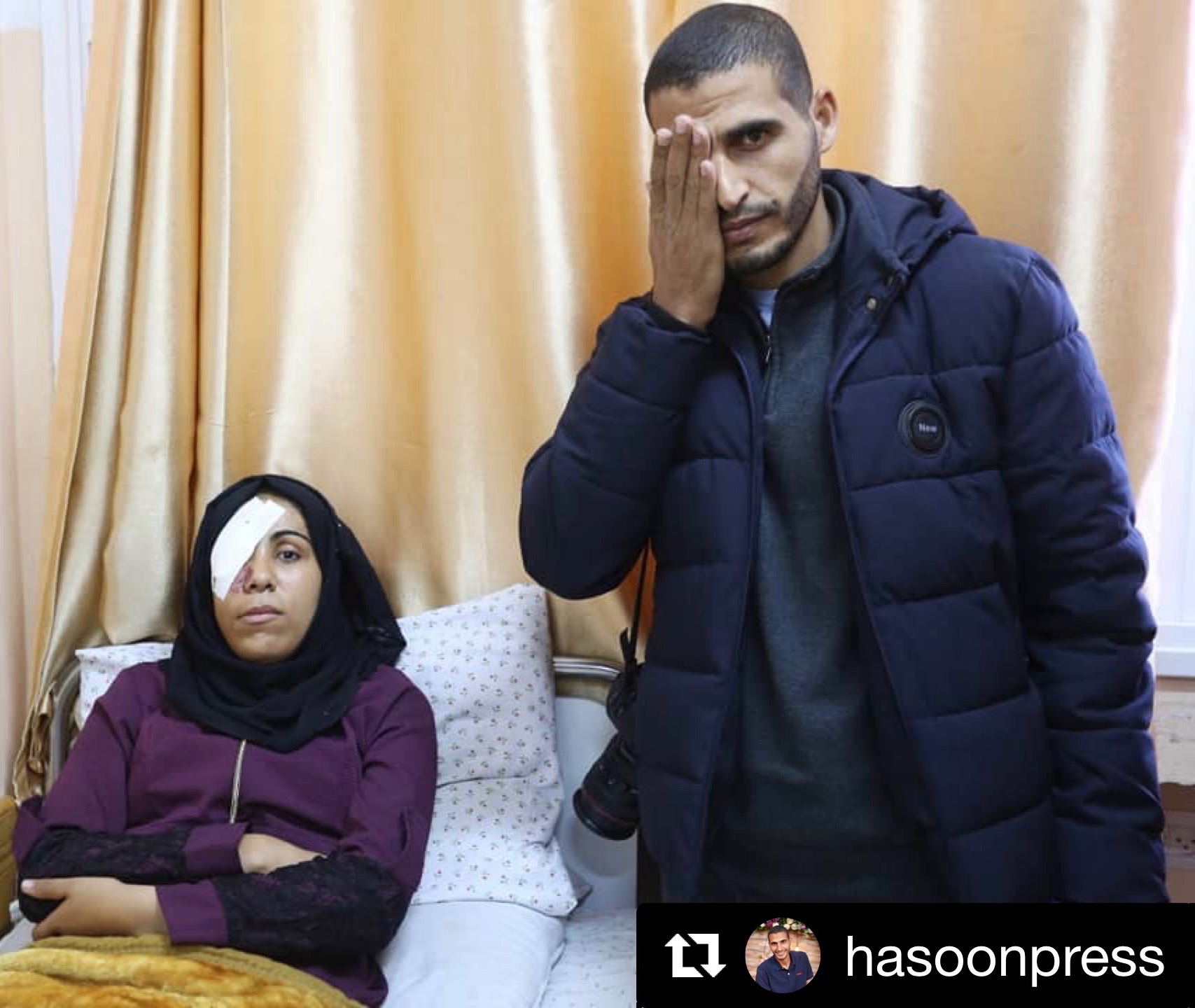 By: Fatima Abu Sbeitan for QNN

In agony and sadness, two Palestinian women spoke out about their experiences after Israeli bullets took their eyes. They did not hurt anyone, they were among thousands of other Palestinians demanding their rights.

“I was in a peaceful protest, seeking our rights.” – Mai Abu Rweidah

Following surgery to remove her damaged eye, Abu Rweidah, 23, cried “I want my eye back!”

She recalled what happened during the protest, stating “I was standing close to the border fence along with others when the [Israeli] soldiers directly and deliberately targeted us with tear gas grenades”.

She continued, saying that one of the soldiers made a provocative gesture before firing a rubber-coated metal bullet directly and deliberately at her right eye.

She was brought to hospital, where doctors found she had a skull fracture and severe damage to the eye, doctors at the Shifaa hospital removed her right eye.

Abu Rweidah studied to be a medical secretary at Al-Azhar University, and graduated just last month.

She says she has been wounded twice before at the weekly peaceful protests; the first was with rubber-coated metal bullets in her leg and hand, and the second was in her forehead, which was very close to her eye. “If it weren’t for God’s mercy, my eye would have been damaged at the time,” she said.

Jacqueline Shihadeh, 31, from Maghazi, is a mother of two children. She was wounded nine months ago by Israeli fire, during Gaza’s Great Return March protests, which began in March 2018.

She relayed her experience at the GRM protest, stating that Israeli soldiers were stationed behind the fence, targeting everyone at the protest. Standing close to the fence, along with other protesters when they were suddenly under fire with live ammunition and rubber-coated metal bullets, and tear-gas canisters.

A rubber-coated metal bullet hit her hand, and her eye, and she was evacuated to hospital, where they found lacerated tendons in her hand. Doctors found a severely damaged retina and a hemorrhage in the eye, which lead to a 90% loss of her vision.

Although Shihadeh has been receiving treatment at specialized medical centers in Gaza, she has hopes of restoring her eyesight, this was more of a psychological loss than a physical one.

Shihadeh says she can’t do very simple things for her family and children anymore. She can’t focus or read a lot, and has been increasingly losing her morale, especially because treatment options in Palestine’s hospitals are very limited.

“My life has been turned upside down, I didn’t expect that the injury would affect my life this way, my eye looks fine but I need treatment so that I can be able to use it again,” – Jacqueline Shihadeh

Both women hope to be treated at hospitals outside of occupied Palestine, they called on officials to help them get treatment abroad, because the occupation state rejects all those, who were wounded during participation in the Great Return March protests.