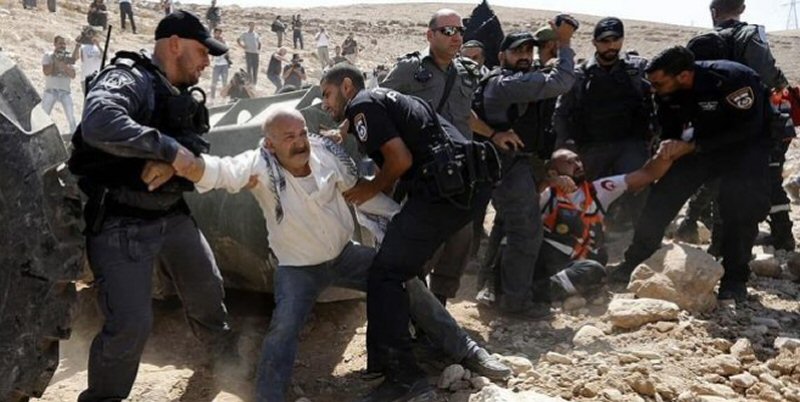 Weeks ahead of the Israeli Knesset elections, which are due to be held on April 9, Prime Minister Benjamin Netanyahu confirmed his intention to demolish the Palestinian village of Khan Al-Ahmar as soon as possible, according to Israeli media reports.

The demolition plan of the Bedouin village is said to be a “great opportunity” to help Netanyahu win the coming elections, according to what he himself said in a private meeting with journalists, last month.

Claiming the village was built illegally on a hill beside a high way between Jerusalem and the Dead Sea, Israeli authorities planned to destroy Khan Al Ahmar as a part of the EI plan, which aims to build several settlement units in order to link the two settlements of Kfar Adumim and Maale Adumim with East Jerusalem.

The village, which has the population of 200 residents, is located in area C of the West Bank, which falls under complete Israeli military and civil control. Palestinians living in C areas face constants threat of eviction and demolition by the Israeli occupation authorities, in addition cannot obtain permits to build any facilities or homes in the area.

Furthermore, PNN reports, Palestinians underline that they live on the land as consequence of the displacement that forced their families to leave their houses during the Palestinian Nakba in 1948.

In September 2017, Palestinian residents were forced to move to a site 12 km away, near Abu Dis village, which is adjacent to a landfill, a fact that was declared a war crime by the International Criminal Court.

Since the demolition plan over the last two years was said to be imminent, the village became the scenario of multiple protests, even bringing the fight to the international attention presenting a case to the ICC.

Despite the fact that Palestinians owned the land, the Israel’s High Court rejected the Palestinian reclaim of their village, saying it is a property of the Israel State.