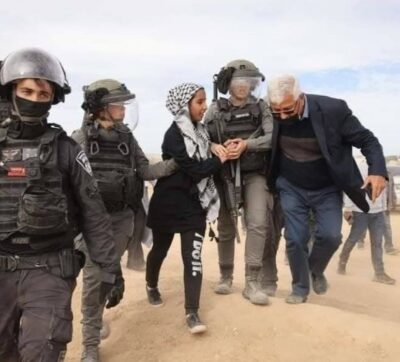 The indigenous Palestinians in the occupied Negev desert continue to struggle for their very own existence and future and are facing seriously escalating Israeli police and military brutality, especially the constant demolitions and takeover of their lands.

The Palestinians are struggling for their very existence on their lands, their basic but ignored rights by the state of Israel that continues to deny and refuses to recognize the dozens of villages and communities that predate this state that was established in the historic land of Palestine in the year 1948.

Attorney Marwan Abu Freih of The Legal Center for Arab Minority Rights in Israel – Adalah, warned of the dangerous escalating violence carried out by the police, the border police, and various Israeli authorities, including security agencies, against the indigenous Palestinians in the Negev.

He added that, just over the last few days, the police abducted more than 130 Palestinians, including women and children, for defending their homes and lands in nonviolent processions that were met by excessive use of force. One of the abducted children is Ammar Abu Qweider, only ten years of age, and is the youngest detainee in Israeli prisons.

Abu Freih said that only eight have been released and that the police keep demanding the courts not to release any of the detainees.

The lawyer also warned of the seriously escalating police violence against the Palestinians in various parts of the Negev and added that most of the detained Palestinians aren’t facing charges as the police keep asking the courts to remand the detainees “until the police decide to file charges.”

He added that one of the serious issues the Palestinians are facing is the fact that the Israeli authorities have lately granted the police more jurisdiction and more power over the Palestinians, in addition to allowing the Israeli Security Agency (Shabak) to abduct, detain and interrogate the Palestinians, and to use the undercover forces in suppressing the protests.

On his part, the International Relations teacher at Be’er as-Sabe (Beersheba) University, Mansour Nasasra, said that what the police is doing in Be’er as-Sabe’, Sheikh Jarrah, Silwan, Lod, Ramla, and many other Palestinian cities and communities, especially the ongoing demolitions of homes and the bulldozing of lands, has been ongoing since the year 1948, and aims at annexing and controlling more Palestinian lands by forcing the indigenous Palestinians out.

He added that the so-called “Jewish National Fund” managed to control large areas in the Negev and is pushing for annexing the Palestinian lands in the Negev and Be’er as-Sabe, as well as other areas, including occupied East Jerusalem, to create a Jewish majority by building more colonies and expanding existing ones. Nasasra also said that what Israel is doing is a direct violation of International Law, especially since the Palestinians have all deeds that prove their ownership of the lands, and it is illegal for the country to displace them by forcing them out of their lands.

He added that after the Nakba of 1948 when Israel was established in the historic land of Palestine, until the year 1967 when Israel occupied the rest of Palestine, the Palestinians lost most of their farmlands and homes due to the illegal Israeli policies of annexation, theft, and displacement.

The lawyer stated that there are 37 Palestinian villages in Be’er as-Sabe’ that predate Israel but remain unrecognized, therefore, the Palestinians do not receive even basic services such as health, education, and transportation.