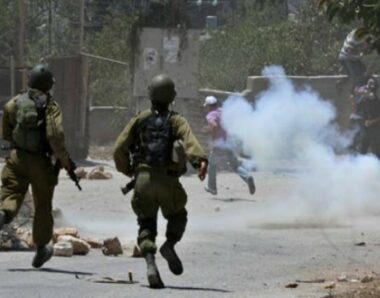 Israeli soldiers injured, on Tuesday evening, at least twenty-eight Palestinians at the entrance of Beita town, south of the northern West Bank city of Nablus, after large groups of illegal Israeli colonizers marched in the area blocking Palestinian traffic.

Ahmad Jibril, the head of the Emergency Department at the Palestinian Red Crescent Society (PRCS) said the medics provided treatment to twenty-eight Palestinians who suffered the effects of tear gas inhalation.

He added that the Palestinians were injured during protests that took place after groups of illegal Israeli colonizers closed the main road and marched in the area while chanting racist slogans against the Palestinians.

Ghassan Daghlas, a Palestinian official who monitors Israel’s illegal colonialist activities in northern West Bank, said the colonizers were calling for displacing the indigenous Palestinians and taking over their lands, and other slogans such as “Israel is in danger… we want a Jewish state.”

The colonizers marched from Za’tara Israeli military roadblock and headed towards the Huwwara roadblock after the army blocked all Palestinian traffic and forced the residents out of the area.

Moreover, the colonizers also gathered and marched on various major intersections between the West Bank governorate of Nablus and Qalqilia, in northern West Bank, and Salfit, in the central part of the West Bank, blocking all Palestinian traffic.

In related news, the soldiers detained two Palestinians in Faqqu’a town, northeast of Jenin in northern West Bank, after many army jeeps invaded it and initiated searches of homes and lands, in addition to blocking many streets and intersections.

The two Palestinians, Rabea’ al-Jaloudi and Othman Salah, were interrogated for a few hours before being released; they were both detained while working on their lands close to the illegal Annexation Wall.