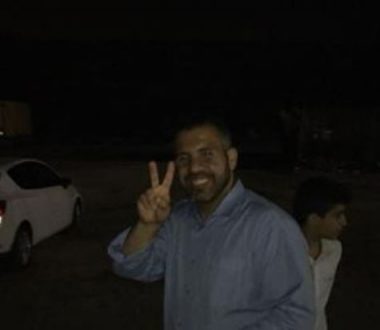 The Israeli Authorities released, on Tuesday evening, a Palestinian journalist from the central West Bank city of Ramallah, after forcing him to pay a fine, in addition to preventing him for working in his profession for two months.

The journalist, Ala’ Rimawi, was abducted, along with three other reporters, on July 30th, 2018, for working for the Palestinian Al-Quds Satellite News Agency, after the military and the Israeli political leadership, decided to classify it as a “terrorist agency.”

The three other journalists have been identified as Hosni Anjass, Mohammad Alwan and Qoteiba Hamdan.

It is worth mentioning that Rimawi launched a hunger strike on the first day of his imprisonment on July 30th, 2018.

The ruling to release Rimawi was made by the military court in Ofer prison, built on Palestinian lands in Betunia city, west of Ramallah; the Israeli prosecutor’s office filed three appeals demanding keeping the journalist in prison.

The court ordered the detainee to pay a 10.000 Israeli Shekels fine, in addition to preventing him from resuming his journalism profession, and forcing him under house arrest, for two months.