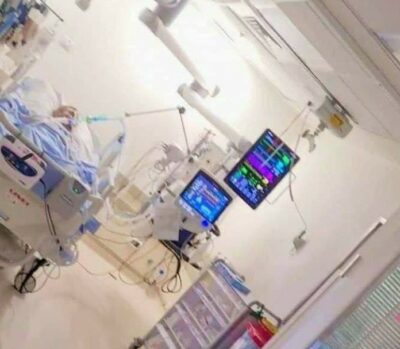 Palestinian political prisoner, held by Israel, Nasser Abu Hmeid, remains in a profoundly serious condition and is constantly sedated due to complications resulting from Pulmonary Edema which is also compounded by lung cancer.

His brother, Naji Abu Hmeid, stated that Nasser is sedated, especially since his lungs are not functioning enough to support him.

He added that the Israeli physicians informed him that they are considering more invasive procedures, which could also include surgery, to relieve the pressure in his lungs.

Three days ago, the physicians in Barzelai Israeli medical center to his brother that Nasser’s lungs are barely functioning at a %30 capacity, and that they keep him sedating hooked to reparatory machines to relieve the pressure on his lungs and avoid further complications.

In August of 2021, after complaints of severe chest pain, Abu Hmeid was diagnosed with a lung tumor and on October 19, 2021, he underwent surgery to remove a lung tumor that was 10 cm in diameter.

He was transferred back to Ashkelon prison and later began chemotherapy, leaving him at substantial risk for recurrent infections.

The detainee’s condition remains very serious as he is also not responding to medication.

It is worth mentioning that Abu Hmeid went into a coma sixteen days ago, after suffering a severe inflammation in the lungs.

He was taken prisoner on April 12, 2002, and was sentenced to seven consecutive life terms and an additional fifty years in prison.

He also has four brothers who are imprisoned by Israel and serving life terms, in addition to a fifth brother who was taken prisoner in the year 2018, and a sixth brother, Abdul-Mon’em, who was killed by the Israeli army, May 31st, 1994.

The family home was demolished by the Israeli army five times, including when it was destroyed the last time in the year 2019.