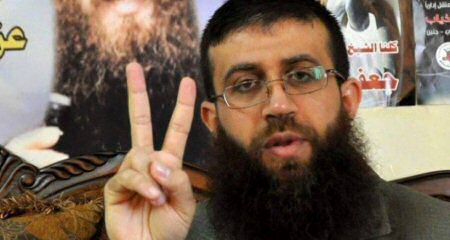 Palestinian political prisoner, Khader Adnan, is ongoing with a huger strike he started five days ago, rejecting his continued imprisonment and demanding his immediate release.

Adnan, 40, started his strike on Sunday September 2nd, and is facing various charges, including what Israel called “incitement.”

Although the detainee is not currently being held under arbitrary Administrative Detention orders, there are no guarantees that he won’t face these orders.

His wife, Randa, said that he informed his lawyer that he intended to declare hunger strike on the first day of his imprisonment.

“His imprisonment is in itself illegal; the occupation can make up charges, or no charges at all; the detainees’ only power is the strike, to protest their imprisonment,” She said.

Adnan also told his lawyer that his imprisonment is illegal, especially since Israel fakes charges to keep him in detention, instead of just holding him captive under Administrative Detention, without charges or trial.

“If this occupation is holding us captive and presses charges against us, it in no way means that we will not launch hunger strike,” he added, “The charges are false, and are only meant to try to prevent the detainees from declaring a hunger strike due to being held under Administrative Detention.”

Adnan also stated he strongly believes that his imprisonment is another form or Administrative Detention, adding that “Israel first abducts us, holds us captive, and later tries to come up with charges to keep us held.”

Talking to Palestine Today, his wife stated that every detainee has the right to demand freedom, instead of spending his life behind bars away from his family, “just because Israel wants to imprison him.”

She added that Israel pressed for 21 indictments based on two main charges which he was previously imprisonment for; being a political leader of the Islamic Jihad movement and his activities in support of political prisoners.

It is worth mentioning that Adnan, from Arraba town near Jenin, previously held two extended hunger strikes for being held under Administrative Detention orders. He has been in prison since his abduction on December 11, 2017.